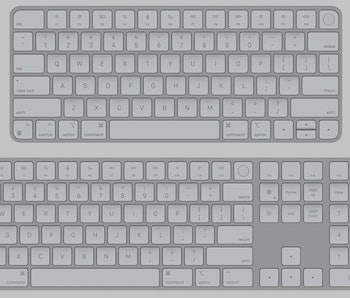 On Apple’s website, the company has begun selling its Magic Keyboard with Touch ID for any Mac with an M1 chipset. The wireless keyboard has been exclusively bundled with the M1-powered MacBook, but you can now buy one as a standalone accessory.

The keyboard is on the pricier end, starting at $149 for the shorter model without a dedicated number pad, or $179 for the model with one. Consider, however, that Logitech’s popular MX Keys keyboard offers a numeric keypad and backlit keys for less, at just $99 retail. But hey, it doesn’t have Touch ID.

Authentication — Apple began offering Touch ID for authentication on desktop Macs just this year. There have been persistent rumors that the company would bring Face ID recognition to its desktop computers, so users could simply authenticate using their beautiful visage. But that hasn’t happened, perhaps for technical or cost reasons. On the laptop side, MacBook screens may be too thin to accommodate the Face ID camera array. On desktop, it’s less clear why Face ID remains absent, though Apple likes to prioritize and has never been one to change things too radically all at once (or else risk releasing a product with glitches). Maybe now that the transition to its own processors has been a success, it will look at facial authentication again.

Dedicated keys — Authenticating with a finger is still convenient. Especially if you’re someone who uses a MacBook on a laptop stand in combination with a Bluetooth keyboard. In that scenario, you have to type in your password on the Bluetooth keyboard or reach up for the laptop’s built-in Touch ID sensor to authenticate with your digit. So the new keyboard could be nice to have — just remember that you need an M1-powered MacBook in order to use the Touch ID sensor, even if your Intel-powered computer has one built in.

The Magic Keyboard with Touch ID has some other useful buttons, like dedicated keys for Spotlight, Do Not Disturb, and quick access to emojis. Unfortunately, while Apple offers iMac users the option to get the keyboard in several shades of color, the standalone accessory is only available for purchase in a silver finish.