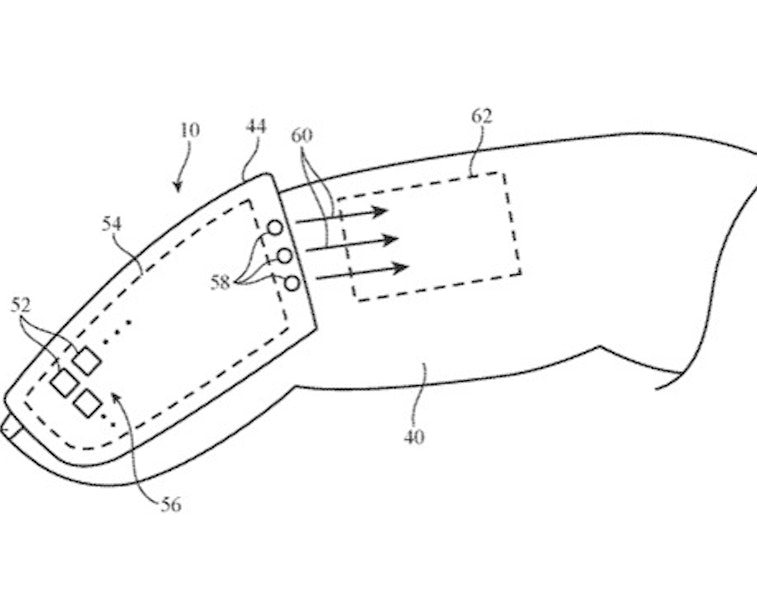 Apple has filed a patent for slim sensors worn on the finger that would provide input for augmented and virtual reality experiences. The filing, spotted by AppleInsider, further supports speculation that Apple is preparing to release an augmented or virtual reality headset and, eventually, AR glasses.

Right now most AR/VR experiences require bulky headsets and controllers for the most interactive experience, or in the case of AR, offer a lightweight experience where you’re really just controlling virtual objects by tapping them on your smartphone screen. Apple’s patent suggests something in-between.

AR vs VR — Apple CEO Tim Cook has been optimistic about augmented reality, in particular, stating in an interview recently that the technology will soon, “pervade our entire lives.” The company has long been rumored to be developing an AR/VR headset, with augmented reality glasses akin to Google Glass coming as early as 2023. Cook has argued that augmented reality will ultimately win out because it can enhance human interaction by overlaying virtual objects on top of the real world rather than isolating people inside their own private, immersive world — as is the case with virtual reality.

Bringing touch into the mix — The latest patent describes a touch sensor that "may be mounted in a finger device housing to gather input from an external object as the object moves along an exterior surface of the housing."

"The external object may be, for example, the tip of the finger other than a finger received within the finger device," it continues. Computer-generated content could also be overlayed on top of real-world objects, and users could interact with it by touching the object, the patent notes.

Apple also filed a patent for a technology that would scan a user’s face and determine the proper fit for a head-mounted device. That makes sense since the finger sensors suggest you wouldn't be holding your phone.

AR and VR alike have seen limited success — Outside of gaming, that is. But Apple clearly thinks that once the technology slims down, use-cases will bear out. One potential use of AR that Cook offered in his interview was providing instructions for an oil change overlayed on top of a car. Google currently offers an AR experience in search that places 3D objects in your camera feed so you can see what a shark or a pair of shoes might look like in person. Instagram and Snapchat lenses take advantage of AR to overlay objects on user’s faces.

It’s worth keeping in mind that companies frequently file patents based on research and doing so doesn’t suggest Apple will ever these introduce finger sensors. But the company is obviously going to make more moves in this space.