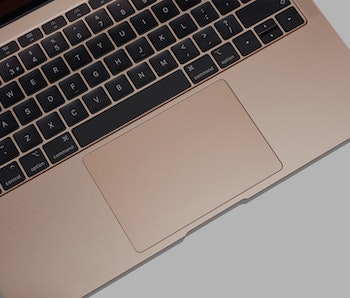 Apple has informed its authorized service providers that MacBook Air models with Retina displays can exhibit issues in their anti-reflective coating. Every MacBook Air released since October 2018 features a Retina display, meaning they're likely all affected.

According to MacRumors, the anti-reflective coating found on Apple's Retina displays for MacBooks is prone to wearing off, causing an unsightly appearance like the one seen here:

User reports indicate that the issue commonly occurs when the display is cleaned using third-party cleaning solutions and microfiber cloths. But others have said they didn't use any such thing on their display and still found the coating wore off. Sometimes the coating wears off around individual keys from the keyboard, leaving the appearance of shadows on the screen. Using a rubber keyboard skin is said to mitigate the issue somewhat.

The problem doesn't exist if you just ignore it? — Besides communicating the issue to service providers and offering a free-repair program internally, Apple hasn't ever publicly acknowledged the issue with its anti-reflective coating on its website or anywhere else. MacRumors says that Apple's documentation for eligible repairs that each service provider receives still doesn't list the MacBook Air as being eligible for a screen replacement under these conditions. Since the company is now mentioning it, however, it's believed that they may begin offering the repair under warranty.

It's kind of crazy that Apple's wildly expensive MacBooks still face this issue eight years after the first Retina machine was released. Apple should either fix the issue or just, I don't know, start selling the computer without any anti-reflective coating; it would cause issues out in the sunlight, but it makes the computer look pretty bad when the coating wears off — and who really likes to go outside anyway?