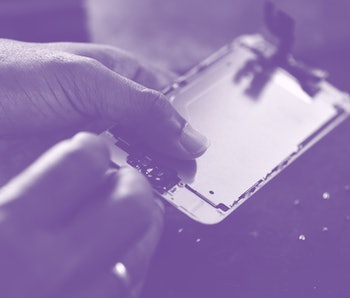 Apple holds a fierce grip over the repair of its devices, providing replacement parts only to those who go through its official training programs and adhere to strict guidelines. The Independent Repair Program (IRP) it introduced last year was supposed to loosen up the requirements a bit, but it seems like more of a PR stunt than anything.

Making independent repairs unattractive — Motherboard obtained the contract that businesses must sign to join the program, and in it, we learn that Apple will provide parts to shops that haven’t received its gold stamp, but it wants them to inform their customers of better options. IRP businesses must tell their customers that they aren’t Apple Authorized Service Providers, and gain written acknowledgment from customers showing they understand they’re receiving repairs from an “unauthorized” provider. This is even though IRP providers still need an Apple-certified technician to complete repairs. Authorized service providers complete more thorough training and design the layouts of their stores to precise specification.

Speaking to Motherboard, a right to repair advocate said that the contract rules make it, “like going to a normal repair shop except one that advertises against [itself] at every possible moment.”

The IRP contract also says Apple reserves the right to conduct surprise audits and inspections at any time to search for “prohibited” replacement parts (read: cheap alternatives). Somehow, the contract states that even if a business leaves the IRP, Apple can still conduct audits for up to five years.

Here's a whopper about those audits:

"If Apple determines that more than 2 percent of a repair business's transactions involved 'prohibited products,'" Motherboard writes, "it can, per the contract, force the business to pay Apple $1,000 for every transaction that occurred during the audit period."

Apple monopolizes repairs — Apple’s Independent Repair Program came following a drumbeat of complaints about the company’s resistance to making it easier for anyone to repair their devices. As it stands now, unauthorized repairs void a device’s warranty, and the company doesn’t even provide repair instructions or parts to anyone who isn’t invited into its repair programs. The behavior contradicts Apple’s commitment to environmental responsibility because the difficulty of repairs pushes people into — you guessed it — buying new devices instead of fixing the already good ones they have.

Apple has been fighting legislation that would make it easier for its customers to repair their own devices. The company argued against a “right to repair” bill in California last year saying that if an iPhone were improperly disassembled, consumers could hurt themselves. Coincidentally, Apple has repeatedly been accused of charging excessively for repair service at its own stores.

It used to not be like this. If I've purchased a gadget outright and own it, I should be able to do a DIY repair as I wish, and shops should be able to get the resources without all this headache. If I take the risk on an "unauthorized" repair and break my device, that's my fault! But that should be at my discretion as the owner of the device. Hopefully California or another big state can end this nonsense and make it easier for people to keep their devices lasting longer.