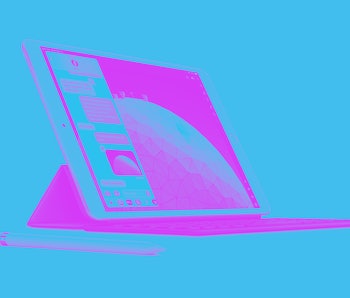 Apple may be about to introduce the USB-C connector to the iPad Air, a report claimed Wednesday. The move, which would replace the existing Lightning port used for charging, would improve connectivity and transform the mid-range tablet into a more viable laptop replacement.

The rumor, as reported by Mac Otakara, suggests an upcoming fourth-generation iPad Air would be based around the 11-inch version of Apple's high-end iPad Pro. Alongside USB-C, the Pro model also features Face ID instead of Touch ID, a button-free front design, straight edges instead of curved, and support for the second-generation Apple Pencil that attaches and charges on the side of the tablet. It's unclear which, if any, of these changes would also make their way over to the new Air.

The report also claims that a new iPad mini will feature an 8.5-inch screen. This chimes with a March report from analyst Ming-Chi Kuo shared with 9to5Mac, which claimed a new version of the tiny iPad would launch in the first half of 2021 with a screen between 8.5 and nine inches. Unfortunately, Wednesday's report claims the new tablet would still sport the Lightning connector.

USB-C helps aid this transition. With iPadOS 13 released in September 2019, the iPad Pro can now hook up directly to an external drive and look through files with the built-in app. It also enables users to hook up peripherals like an external microphone, keyboard, mouse, or practically anything with a USB connection.

A more affordable alternative — At $799 for the iPad Pro plus $299 for the Magic Keyboard, Apple's vision for the future of computers doesn't exactly start cheap. The iPad Air is available starting at $499, making it a more affordable entry-level device. Paired with USB-C, the cheaper tablet looks like a serious alternative to the MacBook line for budget-conscious buyers. Third-party cases like the $149 Logitech Combo Touch, which work with the current Air, offer an alternative to the Magic Keyboard.

Apple's tablet is transforming into an affordable, easy-to-use laptop alternative.