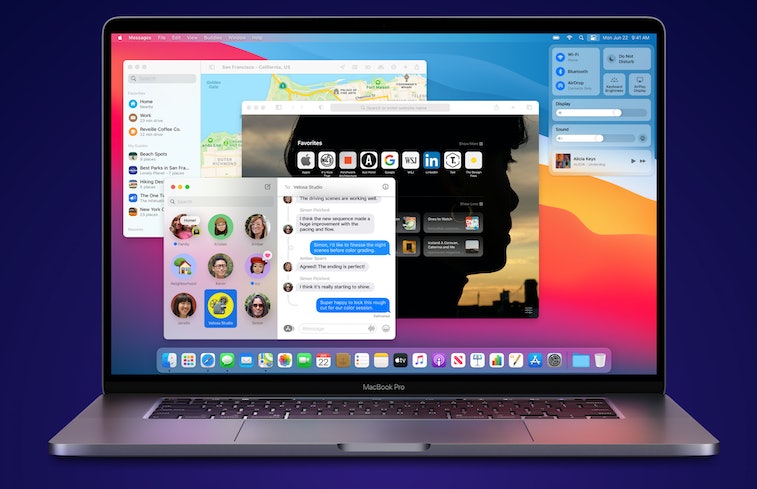 Apple released the first public beta of macOS Big Sur today, one of the biggest updates to the desktop operating system the company has made in recent memory. The updated OS comes with a big visual redesign that makes it look a lot more like iOS. And much to the chagrin of the Roman numerals nerds out there it also drops the "X," finally moving macOS to version number 11.0.

Big Sur comes with a lot of changes to look forward to, like an updated version of Messages that brings the app closer to feature parity with the iOS app. The desktop version of Messages has long been pretty barebones, but in Big Sur, it gains enhanced message effects and Memoji, among other advances.

How to get it – If you want to install the Big Sur beta on your machine, you will need to head over to Apple's beta software portal and sign up with your Apple ID. Once you've enrolled you'll see an option for "macOS." Click that and scroll down until you see the button that says "Download the macOS Public Beta Access Utility." Once you download and run the software it's a pretty straightforward process. Because this is a beta and might be littered with bugs, you should take precautions and back up any essential files before installing Big Sur. Early reports indicate it's pretty stable though.

Better browsing — Safari is getting a lot of improvements in Big Sur. The start page can now be customized with your own background and slicker access shortcuts to frequently visited websites. Hoving over tabs will show you a preview of the page, and a new password monitoring feature will alert you when any of your saved passwords have been compromised in a data breach. Because Apple leans heavily on its reputation for privacy to compete with Chrome, a new weekly Privacy Report will tell you how many cross-site tracking cookies the browser is blocking from monitoring your activity.

Design overhaul – The whole design of macOS has been updated to look more reminiscent of iOS and its sibling,iPadOS, with rounded corners and a Control Center up top where you can quickly access important settings without diving into the Settings app. Apple is sort of returning to its old skeuomorphism days by giving app icons a faux-3D look to create some realism. It emphasizes shadows more than the textures from that previous design style. It's probably something you'll either love or hate, and its one of the first mainstream instances we've seen of neumorphism.

Once new Macs come out with Apple Silicon chips, developers will be able to easily port their iOS apps over to the desktop with no modifications required, according to Apple. That's great because developers can make their apps more versatile and gain access to more users without needing to manage two separate codebases. There are tons of apps developed for iOS that don't have macOS counterparts, so the OS in general will become a lot more useful with access to those. Some apps surely won't make sense on a desktop without touch inputs, however.

There are a lot more improvements in Big Sur that you can check out in the beta if you're interested. Big Sur is supposed to see a stable release sometime in the fall, and Apple says it will work with all of the following computers:

More like this
Sam Hill
5.1.2022 2:30 PM
Guides
How to take a scrolling screenshot on iPhone
Will Gendron
5.4.2022 3:48 PM
Design
Twitter's ‘Close Friends’ feature makes a safe space for your cringiest tweets
Raymond Wong
5.9.2022 3:47 PM
Design
In an alternate timeline, here's what the iPhone could have been