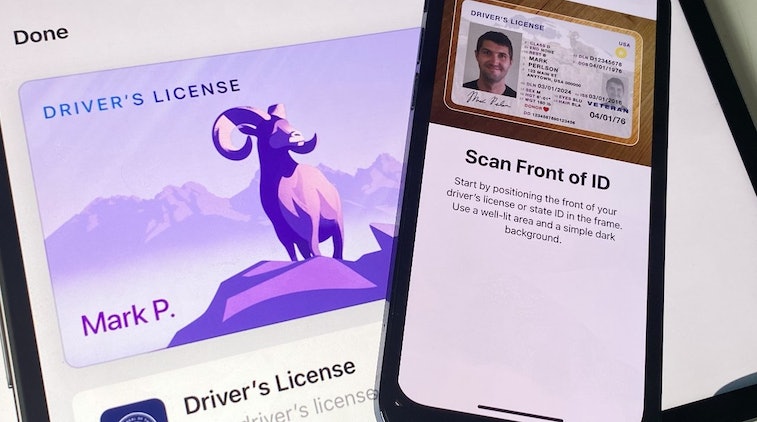 Residents of Arizona and Georgia will soon be able to store their driver’s licenses and state ID cards in Apple Wallet. Other states are to follow, including Connecticut, Iowa, Kentucky, Maryland, and Utah. Furthermore, Apple says the Transportation Safety Administration (TSA) will begin accepting the digital IDs at certain airport checkpoints in order to speed up the screening process.

People have long been able to store payment and loyalty cards in their smartphones, and paying for goods with the tap of a phone is commonplace. But digitizing of identification documents has been slow to follow, likely because driver’s licenses today include a bevy of hidden security features aimed at stopping underage drinking. On a phone, someone could theoretically display a Photoshopped fake much more easily.

Companies like IDEMIA have piloted mobile ID systems in certain states, but the programs have been slow to take off.

How it works — The new option being introduced by Apple will work pretty simply. Where supported, iPhone users will be able to open the Wallet app, press the “+” button, and then select an option to scan the front and back of their ID. In order to prevent someone from simply adding another person’s ID to their phone, users will be prompted to take a selfie, which will be sent along with the ID pictures to the issuing state for verification.

Once verified, a digital ID card will appear in the Wallet app, though it won’t be an exact representation of the user’s ID with their photo and signature — the picture above shows that the card will simply read “driver’s license” in the top left, with the user’s name at the bottom. Apple says that the party requesting identification, be it a business or law enforcement, would use an “identity reader” that would communicate a user’s full ID information over NFC.

It’s unclear how widely mobile ID will be supported in the states that are joining the program, and what businesses like bars and restaurants will need to accept the licenses. IDEMIA in 2018 piloted a program in Delaware that used a mobile app where a more traditional picture of a user’s ID was stored, but business owners had to be trained on how to check the security features. Apple says states set to offer mobile IDs will release more information on implementation at a later date.

Privacy implications — Mobile identification could create obvious conveniences for users. You may forget your ID at home or lose it, for instance, in which case you’d still be able to buy liquor or drive your car without worry. One concern, however, is that law enforcement may ask users to hand over their phone when requesting identification. Apple says that users don’t need to hand over their devices to communicate their information, but police officers won’t necessarily read into the technical specifications before encountering someone using a mobile ID. Police officers often stretch the limits of their legal authority, and if one tells you to hand over your phone, you may feel compelled to do so.

Fortunately the iPhone doesn’t need to be unlocked to display one of these new mobile IDs, so if you do get stopped by law enforcement, be sure to keep your phone locked as you show your identification, so as not to let prying eyes go on a fishing expedition for anything that could land an arrest. Or just use your physical card for any such interactions, and leave the mobile ID for the club.