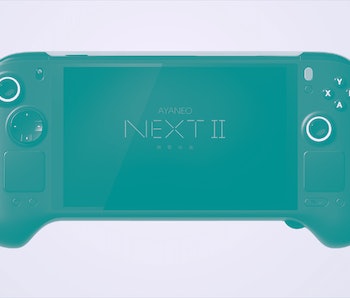 We only just saw news of Ayaneo’s lightweight, affordable handheld last month, but already the company is coming back to flesh out its high-end offerings with the Ayaneo Next II.

The Next II is obviously the successor to Ayaneo’s top-tier Next, which already offers better specs than the Steam Deck. It looks like Ayaneo isn’t happy with that accolade, however, and decided to push the boundary even further.

This latest announcement adds another product to Ayaneo’s extensive offerings, since each of its handhelds has different trims and versions. Even the newly announced Ayaneo Air has a base model, Plus version, and the Pro edition. The Next II is clearly meant for those seeking the highest specs.

A real GPU for handhelds — Ayaneo’s CEO Arthur Zhang only teased a couple of specs for the Next II, but revealed that it would be the first handheld to use an actual GPU instead of integrated graphics. There will be two versions of the Next II, an Intel version with an Alder Lake processor and an Arc GPU, and an AMD version with the Ryzen 6000 and the Radeon 6000.

Zhang also said that the Next II would have detachable and upgradeable modules, specifying that you can upgrade the GPU. This is definitely a bold move for Ayaneo since even Valve warns you against upgrading the built-in SSD within the Steam Deck. Consumers could see this modularity as a huge draw that somewhat softens the blow of a steep price tag.

There are a couple more upgrades with the Next II, including two trackpads on both sides of the handheld and the introduction of a built-in camera. The Next II definitely looks a lot chunkier than its predecessor and more in line with the size of the Steam Deck, but it makes sense since Ayaneo is looking to cram in some high-end specs.

So many options — Now that there are so many Ayaneo models to choose from, it feels a little hard to keep track of all of them. Ayaneo does seem aware of its expansive range of products, so they put out a graphic that sorts out all the different categories, including affordable, mid-range and premium.

Ayaneo didn’t announce any pricing or availability details for the Next II, but it’s a fairly safe to assume that it will be more expensive than the first Next handheld. As a reminder, the Next starts at $1,265 and goes all the way up to $1,765 for the pro model.

More like this
Jackson Chen
7.28.2022 3:37 PM
Tech
Backbone’s new mobile controller is made for taking PlayStation on the go
Ian Carlos Campbell
2 hours ago
flipping out
The Galaxy Z Flip 4 is Samsung’s most popular foldable, all grown up
Raymond Wong
1 hour ago
Tech
Samsung Galaxy Z Flip 4 — in pictures