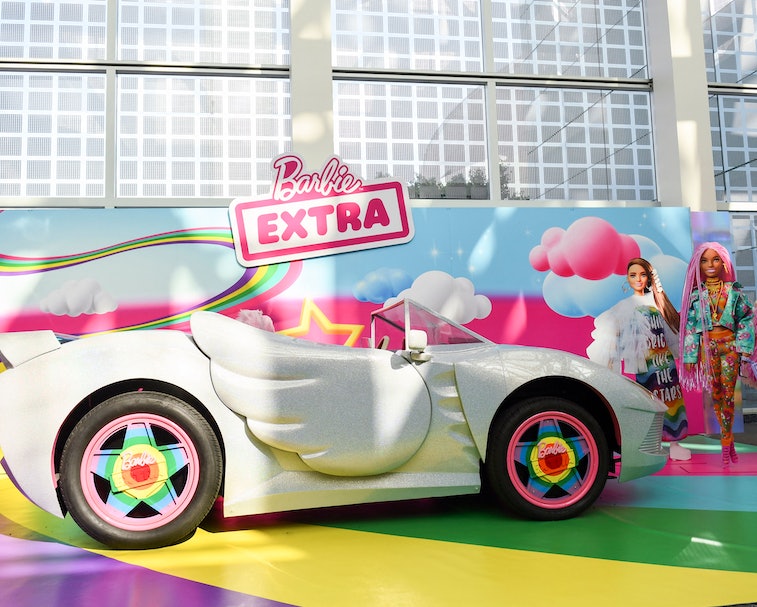 Barbie’s ultra-pink, gas-guzzling convertible days are over. She’s ditched that classic Corvette for something a little less harsh on the environment, though the replacement certainly isn’t any less ostentatious.

The new Barbie Extra Car rolled up to this week’s LA Auto Show to make its official debut, Roadshow reports. The silver, two-seater convertible is perfect for a life-size doll, with rainbow wheels, star-shaped headlight housings, and curvy wings.

You probably wouldn’t recognize it with all its custom trimmings, but this is actually a modified version of the Fiat 500e, the automaker’s flagship all-electric vehicle. Unveiled in November 2012 at that year’s LA Auto Show, the 500e was actually one of the earliest electric vehicles available in the U.S.

Barbie’s new whip isn’t as powerful as her classic pink Corvette, but it will significantly reduce her negative impact on the environment. Who better than Barbie to teach kids about the evils of Big Oil? Being eco-friendly is so chic (just don’t mention Barbie’s made of plastic, yeah?).

Keeping it cool and eco-friendly — The Barbie Extra Car is a stunning feat of car-making. From the shiny exterior to the fuzzy pink headrests, it’s definitely the most unique EV we’ve seen yet. We’d expect nothing less from Barbie, though.

The Fiat 500e base used for the car isn’t built for long road trips in the way something like a Tesla might be, but it’s perfect for quick trips to the mall or around town. It’s got 147 pound-feet of torque and 111 horsepower — but that’s plenty, really. Barbie’s not usually one to go off-roading. She’ll be able to drive it about 100 miles in between charging sessions.

But…it’s not for sale — There’s really only one piece of bad news about the new Extra Car: it’s one-of-a-kind. Barbie’s the only one who will be able to own one, which does seem fair, seeing as it’s named after her.

You can take home a slightly modified version of the Barbie Extra Car, though. A toy version is widely available in stores right now, and it costs just $30. The trimmings are all the same — this one just isn’t ready for the highway. It does come with a tiny toy puppy, though, which seems like a fair trade-off.

The human-sized Extra Car was actually created from the toy version’s CAD files, a Mattel spokesperson told Roadshow. The full assembly — which included 3D printing and hand-painting those wheels — took two and a half months. We’d say it was worth the effort.