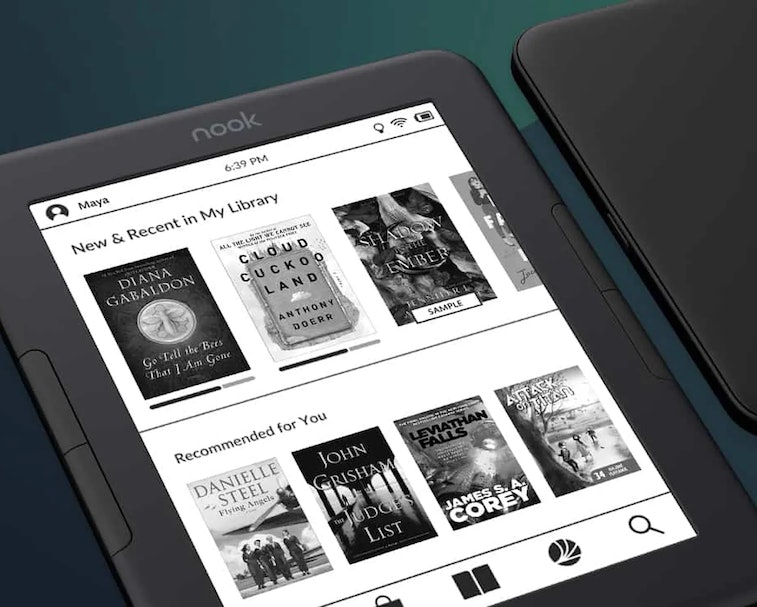 Following close at the heels of competitors Amazon and Rakuten Kobo, Barnes & Noble has revealed a fresh addition to its e-reader lineup called the Nook GlowLight 4. The device is a direct successor to 2017’s GlowLight 3 and is significantly more reminiscent of earlier Nooks than this year’s Lenovo-made tablet.

The new GlowLight — coming to U.S. B&N stores on December 8 for $149.99 — features a 6-inch 300 DPI E Ink screen with a built-in glare-resistant screen protector. It includes 32GB of built-in storage, B&N’s signature GlowLight illumination, and the line’s first USB-C port. Physical page-turn buttons once again flank the device on either side.

After a few years of near-dormancy, Barnes & Noble says it’s ready to jump back into the e-reader market at full pace. “Barnes & Noble is now investing significantly in our Nook lineup of products,” said Barnes & Noble CEO James Daunt. “The GlowLight 4 is the second Nook device to launch this year as we set about to bring a new family of devices to our customers and to reinvigorate Nook in the coming months and years.”

A legacy competitor enters the ring — Barnes & Noble is not the bookselling giant it once was. Many of the company’s brick-and-mortar stores have been forced to close in the last few years, thanks in no small part to Amazon’s impossible-to-compete-with prices.

Shifting focus back to the Nook is a savvy move from Barnes & Noble. Nook’s releases have been minimal as of late, with only two E Ink devices released in the last five years. But the e-reader market is hotter than ever, with supply chain issues and other pandemic restrictions convincing many readers to make the switch to ebooks.

But can it hold up? — The e-reader market boom also means the new Nook will face stiff competition. Its two closest competitors will be Kobo’s Libra 2 and Amazon’s Kindle Paperwhite. Both fall squarely in the mid-range for both price and features.

It will be difficult for the new Nook to stand out amongst this crowd. It’s missing a few features that Kobo and Amazon have added to really modernize their devices in the last couple of years. The 6-inch screen is significantly smaller than both the Libra 2 and the Paperwhite; the GlowLight 4 is not waterproof; it supports fewer file types; and the design here is a little less modern-looking, with its chunky bezels.

These are not make-it-or-break-it features, of course, and in many ways the GlowLight 4 matches e-readers offered by Amazon, Rakuten Kobo, and others. And it is significantly more modern than the GlowLight 3, so those looking to upgrade will be pleasantly surprised by the announcement. The device’s success could pave the way for a whole new lineup of Nook devices. Barnes & Noble hopes so, at least.