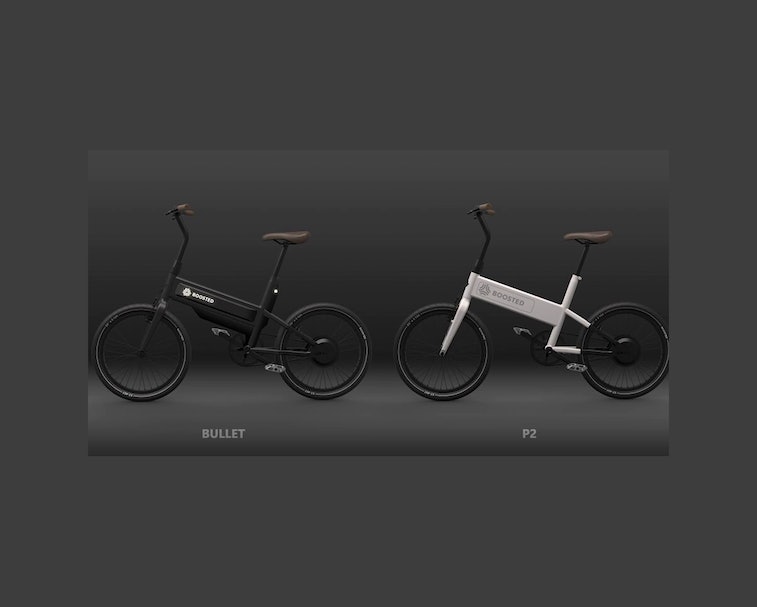 Boosted, the company that popularized electric longboards, was working on some very interesting electric rideables before it went bankrupt in March and was forced to sell its patents to Lime. YouTuber Sam Sheffer, an avid Boosted Board rider, has shared unreleased images of several products Boosted was developing, including two electric bikes and a few new electric skateboards.

According to Sheffer, one of the electric bikes was called Bullet. The other was called P2. Based on the photos, he says the only difference appears to be battery size and color. This is fascinating because Boosted never released an electric bike.

Boosted was born out of a successful crowdfunding campaign on Kickstarter, which vaunted its electric longboards to popularity. Vloggers like Casey Neistat practically helped sell the e-boards with their frequent appearances in their videos. Boosted then added a smaller Boosted Mini S and X in 2018 and then finally the Boosted Rev electric scooter last year before running out of money to sustain operations in March.

In an alternate universe, it's possible Boosted's Bullet electric bike would have gone up against the likes of the Vanmoof S3 and X3. But we'll never know.

Boosted Scoot? — Another photo shows a scooter that's much smaller in size compared to the Rev. The wheels are smaller, the deck is narrower, and the entire frame is punier. It's unclear if the Scoot was an early concept that evolved into the Rev or an altogether new product in the pipeline. It's stark how different the two look, though. The Scoot is far more minimalist next to the Rev and its beefier frame and stomp brake.

More electric skateboards — Then, there's the Boosted Little. This seems to be an electric longboard that's about two-thirds the size of the regular Boosted Boards. Sheffer notes that the battery and motor control are separate on the Little, which could have given the board more flexibility for riding over rough terrain. There's also only a single motor versus the dual motors on the Boosted Board and Mini.

Former Boosted CEO Jeff Russakow previously told me the company considered single-motor electric skateboards "toy-like" because they're not really transportation vehicles designed for the rough streets. That's why Boosted always went with dual motors with a belt-drive system instead of hub-based motors, which are weaker.

Sheffer also shared an image of a "Boosted Ultimate" with four motors, which resembles a turbocharged version of the Boosted Stealth.

Next, there's a Tony Hawk Boosted board with an old-school skate deck that's larger than the Boosted Mini and sported Birdhouse branding. It's possible this was meant to be a special collaboration release with Tony Hawk. That would have been pretty sick. Check out the Boosted Beams lights underneath the deck.

Lastly, the video shares an image of a prototype Boosted Board with LED lighting embedded into the side of the deck.

Again, we'll never know what could have been. It's unclear what Lime plans to do with its new portfolio of Boosted patents. But considering how beloved the brand is by its customers (the r/BoostedBoards subreddit is filled with loyalists who are trying to keep the boards operating with third-party servicing and such), it'd be a missed opportunity if Lime didn't revive Boosted in some capacity.

For now, Last Mile SF has procured Boosted's remaining inventory and is selling them on a newly minted Boosted USA site.