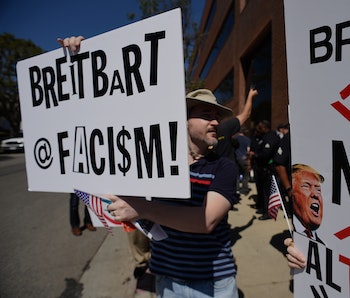 Far-right news website Breitbart continues to make money from digital ads. That's even though the website has been blacklisted by major brands and advertising networks over its extremist content. According to an investigative report, Breitbart is using advertising IDs shared by other websites to pass itself off as a more brand-safe property.

The issue highlights how fraud continues to be rampant in online advertising. Recent reports have estimated that companies lost more than $23 billion to digital ad fraud in 2019.

This 'hack is stupidly simple — Breitbart is passing itself off as another website to advertisers by using a direct advertising ID also used by major websites including MLB and MSNBC. When an advertiser uses MSNBC's direct ID in order to target advertisements on its website, the advertiser may be unknowningly placing advertisements on Breitbart as well — even if they explicitly blocked Breitbart from their list of acceptable websites. Other alt-right and tabloid websites are also using the ID.

The workaround is made possible because some major ad networks still allow Breitbart to work with them. AppNexus blacklisted the website in 2016 citing hate speech concerns. After AppNexus was acquired by AT&T and rebranded as Xandr, Breitbart was allowed back into the advertising network. On the backend, all the money advertisers send to a direct ID is pooled and the ad network distributes the money across all the websites using the ID, based on their traffic.

Ad networks are probably to blame — The current system of advertising IDs is only three years old. Websites place a "ads.txt" file on their website containing IDs for advertising purposes, and then join an ad network like Xandr through which brands can quickly buy advertising campaigns. Because the system is so new, many major companies and their advertising consultants may not understand that a "direct ID" can easily be used by more than one website — the word 'direct' implies it targets one specific website. Advertising IDs can also be labeled as "reseller," indicating that ads might show up on multiple websites. For example, if The Washington Post has multiple sites, advertisers can use a reseller ID to target them all.

By permitting multiple unaffiliated news sites to use the same direct ID, Xandr and other advertising networks are allowing major companies to inadvertently send money to Breitbart. Quality media websites are providing a screen and giving a legitimate appearance to shady websites.

Bad for advertisers, bad for publishers — Unfortunately, such behavior by open advertising marketplaces could push advertisers to stop advertising on individual sites altogether and take their money elsewhere — such as to Google. News websites are already struggling enough as is to make money from advertising, as it all gets siphoned away by Google and Facebook.

Online ad fraud poses a constant challenge for the industry. Earlier this year the FBI took down fraudsters who used bots to trick advertisers into thinking their ads were being seen by real people, causing an estimated loss of $30 million to fake views.