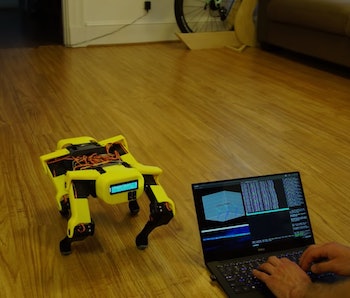 Boston Dynamics’ robotic quadruped assistant, Spot, has been pure technological nightmare fuel for the past four years now. While the company swears the thing can be put to good use in a variety of environments and situations deemed too hazardous or difficult for humans, we all know what that’s code for... the beginnings of a four-legged robot army that one day will be the end of us all. It turns out, some people are apparently not only cool with this, but they’re willing to hasten our demise. Enter the homemade Spot Micro, powered with a basic Raspberry Pi 3B.

Two speeds, one tiny package— First seen on Reddit courtesy of u/TheTrueOnion (Michael Romanko), the Spot Micro came about from the Redditor’s desire to teach themselves robotic software coding via C++ and Python. Encased in a 3D-printed frame of their own design and powered by a 2s 4000mAh LiPo battery, the Spot Micro functions with a keyboard on a “three-axis angle/command body pose control mode” and currently has two speeds: a “walk” and “trot” gait (thankfully, there’s no “run” speed... at least, not yet). The Spot Micro’s walk gait allows it to move each leg individually coupled with a balancing body swing much like a human’s movement, which isn’t creepy at all, while the trot gait moves two legs at a time, mimicking a (you guessed it) horse.

As if unsatisfied with just one of these Spot Micros potentially murdering their creator in their sleep, Romanko went ahead and even posted all the necessary coding on GitHub to program your own mini-killbot via a Raspberry Pi running Ubuntu 16.04 with the aforementioned C++ and Python nodes running in a R0S framework.

Cost-benefit analysis— Last we checked, an official Spot-Bot (our nickname, not theirs) will set customers back around $74,000, and be limited to two per order. On the other hand, a Raspberry Pi 3B only costs $35, so even with the additional necessary parts, you’re still much better off assembling a militia of roughly 2,000 Spot Minis on your own.

But if they turn on your and your family and eventually learn to self replicate, sending humans into hiding, hoarding ammo, and eventually turning against one another, well, don’t say we didn’t warn you.