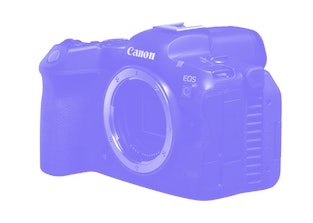 The resolution Canon's new EOS R5 C can record at.

Canon’s EOS R5 C might be a chunky beast, but its size makes a lot more sense when you account for the fact that it’s essentially two cameras combined into one. While it captures the still photo capabilities of Canon’s mirrorless EOS R5 cameras, it also incorporates the video prowess of Canon’s Cinema EOS line.

Canon clearly designed this camera with videographers in mind since the bulky design made room for an active internal cooling system that prevents overheating, meaning you can continuously shoot video without being interrupted by a sudden shutdown. And if you want to shoot video at a higher frame rate, the EOS R5 C can also record video at up to 120p in a lower 4K resolution.

Dual-purpose design — Canon made it very easy to switch between photo and video with a power switch that can toggle to either mode. When in photo mode, the EOS R5 C’s interface takes on the familiar menus from Canon’s R5 cameras and when toggled to video mode, the camera’s UI looks similar to the Canon Cinema EOS menu.

Canon designed a good amount of flexibility into the EOS R5 C to make your workflow with all these video files a lot easier. You can, of course, take full advantage of the maximum 8K60p resolution, which allows you to crop out 4K footage afterwards if you then decide you don’t need such high-quality video. The Camera Raw Light format that the videos are saved in can also be tuned to a high quality, standard quality, or light recording mode that gives you even further control to figure out the perfect balance between file size and video quality. You can even bump the EOS R5 C down to 4K120p, which is better suited for recording fast-paced action scenes.

If you’re trying to move the files quickly, the EOS R5 C can record 8K video in the more universal MP4 format. On top of the video file flexibility, Canon made locating and handling audio files a lot simpler since the camera records audio files as a separate file from the video files.

No IBIS — When shooting stills, the EOS R5 C is almost identical to the Canon EOS R5 that was released in 2020. The camera was built with a 45-megapixel full-frame CMOS sensor and offers an ISO range of 100 to 51200, which is expandable to 102400. The EOS R5 C can shoot at 12 fps with its mechanical shutter or at 20 fps with its silent electronic shutter.

Even though it looks pretty heavy, the EOS R5 C weighs 1.7 pounds, which isn’t too much heavier than the previous EOS R5. Canon’s new camera also features a 3.2-inch adjustable LCD screen and a high-def electronic viewfinder. The EOS R5 C has dual card slots, one for CFexpress and one for UHS-II SD cards.

March release — Canon says the EOS R5 C is scheduled to be available in March 2022 for $4,499. The price point may seem a little steep to some consumer-grade photographers, but Canon seems to be aiming for the professional videographers with this new camera, who are already used to expensive setups. At least with this, they’ll be a real multimedia shooter.