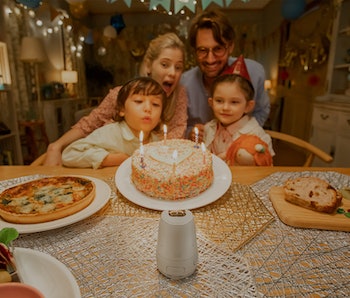 For better or for worse, Canon is introducing a “smile tracking” camera to the U.S. The Powershot Pick uses AI tech to identify and track subjects, as well as automatically snap photos of them. As interesting as it sounds, it’s definitely equal parts creepy and cool.

The cool part is the Powershot Pick will capture truly candid moments since no one’s behind the lens corralling people for a group photo. We won’t have to go through the whole process of getting everyone in the frame, asking them to pose, and then getting in the shot yourself. As convenient as this sounds, the Powershot Pick still does feel a little creepy since it’s constantly scanning you and your friends for opportunistic shots.

To be fair, active tracking technology is pretty commonplace these days. It’s built into consumer drones and even home security systems. Yet, the Powershot Pick does give us some pause since you’re using it for things like social media post or family home videos.

Set it and forget it — Canon designed the Powershot Pick to be lightweight at 170 grams so you can easily bring it with you to any occasion. It can catch most of the action since it has 340 degrees of panning movement and between 20 and 90 degrees of tilt.

The Powershot Pick has a 1/2.3 CMOS sensor that will produce 11.7-megapixel photos and 1080p videos at 59.94, 29.97, and 23.98 frames per second. The lens itself has a 19 to 57mm focal length, but the camera can zoom up to 3x optically and 4x digitally. Along with the active tracking feature, the Powershot Pick has auto capture and auto image stabilization built in.

You can even go truly hands-free with the Powershot Pick since it understands voice commands for taking photos and videos. It feels a bit lazy with this set-it-and-forget-it style of photography, but Canon says it could do well with content creators who have their hands occupied doing cooking tutorials or dance videos.

Coming to America — The Powershot Pick has already been out in Japan since February 2021 and was later released in Europe, but Canon is bringing it stateside by late summer 2022. It will retail for $500.

It seems like Powershot Pick has done well enough for Canon to expand it beyond the initial Japanese market. It could definitely take off for certain content creators in the U.S. and maybe for parents who don’t want to bother posing fussy kids in family photos and videos. Still, it feels like a fair reaction to be a little weirded out, even if you’re a fan of convenience over AI creepiness.