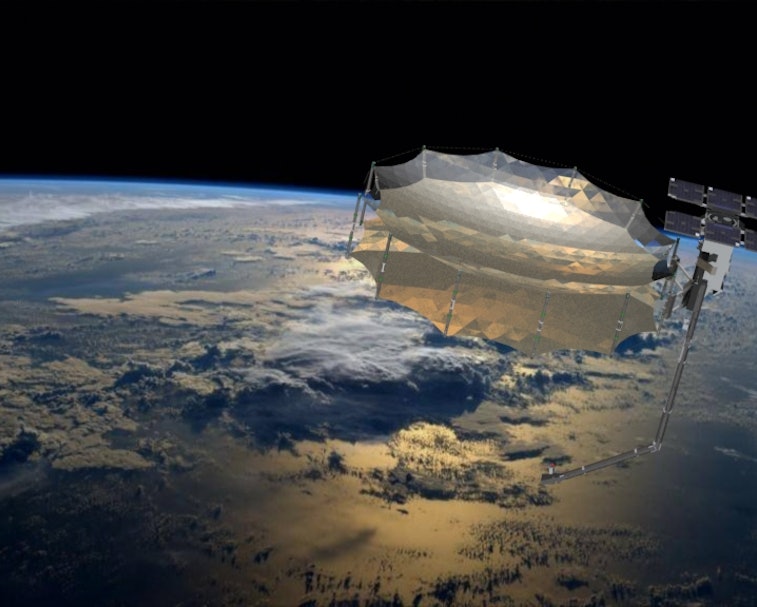 A new satellite from Capella Space sounds... pretty creepy. Like other hunks of metal currently orbiting Earth, The Capella-2 satellite's onboard radar system makes it capable of producing ludicrously high-resolution visuals from its data. More unconventional is the service Capella has launched to match: the government or private customers can, at any time, request a view of anything on the planet that's visible from the sky.

Right now there’s just one Capella-2 satellite roaming around in the atmosphere, so that functionality is somewhat limited. Capella plans to launch six additional satellites with similar capabilities in the next year.

The Capella-2 is certainly an enormous leap forward in space-based photography; it will surely usher in more of a race for this type of technology — and with that, a whole new set of privacy concerns.

Undaunted by clouds — The Capella-2’s system of cameras and sensors is nothing short of magnificent. The satellite uses something called Synthetic Aperture Radar (SAR), a technology used by NASA since the 1970s, to detect the Earth’s surface through even the densest of clouds. SAR sends a 9.65 GHz radio signal toward the Earth and interprets the signal as it returns, using that data to form a visual.

Capella is one of the only companies in the U.S. testing and improving SAR technology. The Capella-2 is now the highest-resolution commercial SAR satellite in the world, capable of 50 cm x 50 cm resolution imaging. Other satellites are only capable of resolution up to about five meters.

The largest barriers to satellite imagery are darkness and cloud cover. “When you combine those two together, about 75 percent of the Earth, at any given time, is going to be cloudy, nighttime, or it’s going to be both,” Capella CEO Pay Banazadeh told Futurism. “It’s invisible to you.”

A privacy nightmare? — Along with its new satellites, Capella is launching what it calls the Capella Console, an on-demand satellite data service. Anyone with internet access can (after being vetted per International Traffic in Arms Regulations) ask for access to data already captured by the Capella-2 or submit a request for new observations.

Banazadeh sees the Capella-2’s imagery tricks as pivotal to humanitarian work like observing the spread of forest fires and tracking deforestation. And this tech will undoubtedly help in those situations.

But it could also fuel the type of surveillance that privacy experts have panic attacks about due to the sheer power of Capella-2’s signal system. Capella already has contracts with government agencies, including the National Reconnaissance Office and the U.S. Air Force. It’s not much of a stretch to imagine high-resolution SAR technology turning into a tool for national surveillance.

Once Capella’s full squadron of satellites is airborne, the company will have the ability to quickly snap views of just about any place in the world. That power could quickly be abused if left unchecked.

Correction: A previous version of this article stated in error that the satellite can see into buildings. It cannot. The post has been updated to reflect this.