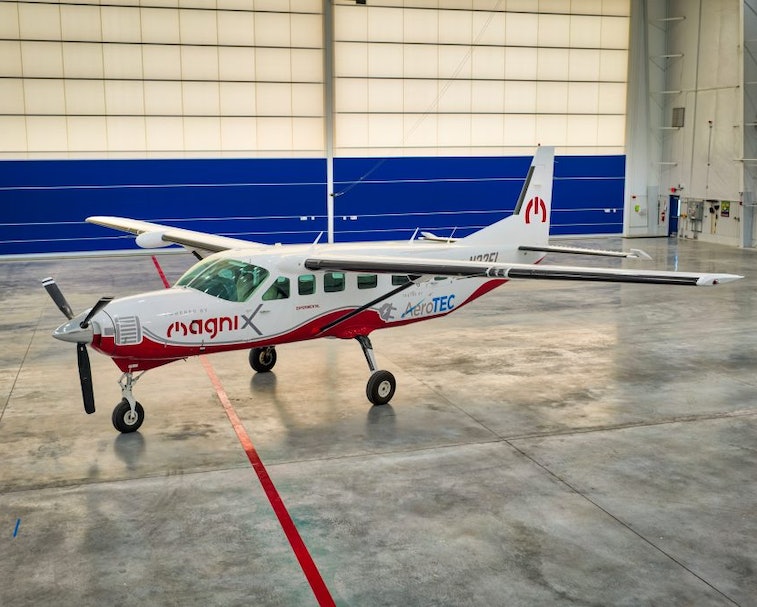 MagniX performed its first test flight of an all-electric Cessna, dubbed the eCaravan, on Thursday, according to a report out of SlashGear. The eCaravan traveled for a record 30 minutes in what was a zero-emissions flight. Created through a partnership between MagniX and AeroTec, it's said to be the world's largest all-electric passenger aircraft.

The eCaravan isn't a large commercial airliner that's going to fly hundreds of people cross-country, but it could potentially be the future of shorter hops that go to and from smaller airports — think flying from Boston to Cape Cod. More importantly, though, it could lead to future aircraft that massively reduce the environmental impact of air travel.

Further than a cab — "Middle-mile transit," as it's called, refers to passenger and commercial transportation up to 1,000 miles. By making these flights all-electric, cost and emissions could come down dramatically. The eCaravan had its traditional engine replaced with a MagniX magni500 propulsion system that delivers 560 kW in a motor that the company claims is more than 93-percent efficient. The plane design is based on an aircraft that can seat 10-14 people with a maximum range of 912 nautical miles.

The other electric aircrafts currently being tested in the marketplace, eVTOLs (electric vertical take-off and landing), are only designed for inter-city transportation of three or four people — plus luggage — at a time, and tend to have a range of only a 100 miles or so.

No more flying guilt — By lowering fuel costs, better transportation could be extended to far off, rural destinations that aren't currently well served. And the energy for them could be generated through renewable sources like wind and solar, meaning you wouldn't have to pull a Greta Thunberg and travel days by boat to get somewhere while still sleeping soundly at night about the environmental impact of your getting there.

The scale of battery production and recent innovations that improve their usable lifespan (along with a policy pushes thanks to global warming) have led to an acceleration in the electrification of transportation vehicles, whether terrestrial or aerial.

This article was originally published on May 29, 2020