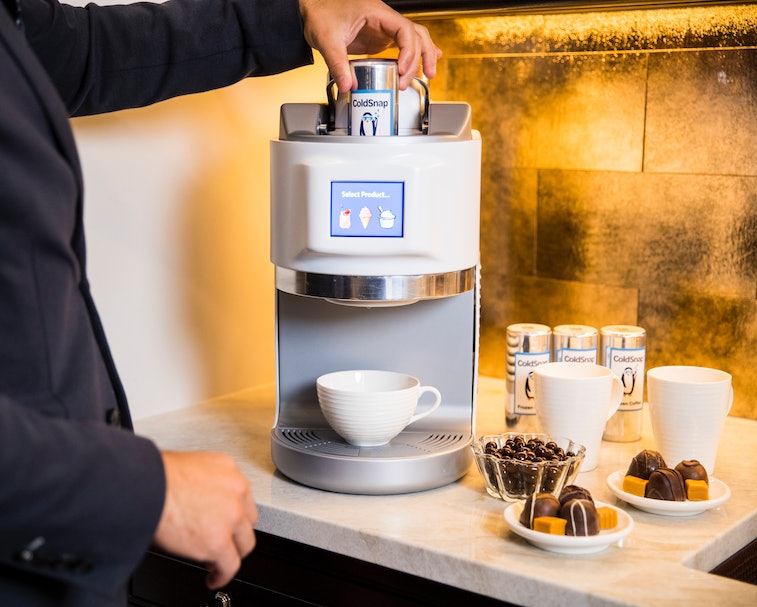 What if you could buy a machine that could easily conjure up some of the most delicious confections and beverages without taking more than a few minutes? Say, not more than 160 seconds. ColdSnap's creators are offering the lovers of ice cream, frozen yogurt, coffee, smoothies, milk shakes, cocktails, and slushies just that.

Presented at CES 2021, ColdSnap is yet another creation within the realm of pod-based instant food machines. It's still in its prototype stage but if it hits retail shelves, this machine will cost you anywhere between $500 up to $1,000.

If you're a Keurig owner, you're already familiar with the concept of pod-based drinks. But while Keurig has the promise of convenience for coffee lovers — you pop a Dunkin' Donuts, Starbucks, or other equivalent pod in and grab your cup however you like it — ColdSnap will have to work a lot harder to convince people that pod-based instant food machinery is worth the price, amount of kitchen counter space it requires, budget for machine-specific pouches, and other efforts. And if it fails to win people over, it could face the rather sad fate of Juicero. Remember Juicero?

How to avoid pulling a Juicero — Silicon Valley once presented a juicer worth $400. Ambitiously dubbed the Juicero in 2013, this press made glasses of all kinds of juice with the help of juice-filled pouches. Four years later, in 2017, Juicero declared bankruptcy. Although its creator was able to win funding under the promise of innovation and disruption, Juicero's shaky business model eventually tanked the entire operation altogether.

The machines were expensive and otherwise useless; each packet for vegetable and fruit juices cost consumers somewhere between $5 and $7, the initial price of $699 for one Juicero was a huge turn-off for buyers, and even bringing it down to $400 wouldn't do the trick. It was designed to fail.

It's too soon to predict ColdSnap's future and it would be unfair to prematurely liken it to Juicero. ColdSnap, at least, can make multiple edible items and drinks (and it comes with recyclable pods, which is a nice bonus). But that's about it. It takes a large deal of kitchen real estate and comes with a rather intimidating price tag. It will be interesting to watch its creators convince the average buyer to ditch an easily purchasable cone of ice cream or cup of coffee and opt for a permanent instant food machine at home.