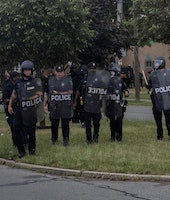 The rate at which DataWorks' software misidentifies people.

On Tuesday, the Detroit City Council voted 6–3 to approve a two-year, $200,000 contract with facial recognition company DataWorks, according to the Detroit Metro Times. Earlier this year, Motherboard reported on how the software misidentified people and is used primarily on Black people. Clare Garvie, a senior associate with Georgetown's Center on Privacy & Technology, attended the public Zoom vote, claiming the Detroit Police Department hinted at continuing to use the technology even with a no vote, just not updating it.

If it’s broke, don’t fix it — Motherboard’s reporting featured Detroit’s own police chief, James Craig, stating the South Carolina-based DataWorks misidentified people 96 percent of the time. Facial recognition software has a terrible track record when it comes to accurately identifying non-white, non-male people. With such an egregious error rate, the use of this technology in a Black-majority city only serves to enforce systemic racism and uphold the carceral state.

The council first approved $1 million for facial recognition software adoption in 2017. In concert with Project Green Light, a program where businesses pay to have the police monitor their surveillance footage in real-time, the technology has largely been at odds with the community. The Detroit Will Breathe coalition led a caravan protest during the council meeting, met with general support from residents, according to The Detroit News.

The insidious prevalence of facial recognition — Though we're now well aware of big, scary names like Clearview AI and Palantir, there are even more companies we don’t know, some of which simply rebrand to eschew scandal. DataWorks software is also still in use in Raleigh, where local law enforcement shuttered its Clearview partnership amid backlash.

While some cities are dialing back their surveillance efforts, Detroit is supplementing more than 500 cameras around the city — placed everywhere from parks and churches to abortion clinics and addiction treatment centers since 2016 — with another 500 high-definition, intersection cameras.