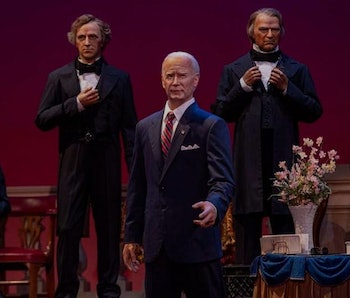 The Hall of Presidents has been around since the 1964 World Fair, and each president gets their own robot. Even Trump had one, which can now be seen in the back left corner in the video below. Though Disney understandably had to be careful with what sound bites it used from the 45th president, who had a proclivity for saying either vile or imbecilic things. So no, his robot doesn’t say anything like “COVID is a hoax” or “the election was stolen.”

Hall of Presidents — Disney fans have repeatedly requested that Trump’s robot be removed. Seeing the 45th president in what’s supposed to be the “happiest place on Earth” feels a bit jarring, to say the least. But Disney is trying to walk a fine line and not alienate any guests, plus, like it not, Trump was President — may it serve as a warning to us all not to get complacent, and to perhaps look a little further than a handful of families for Presidential candidates. Maybe they could just face him towards the wall, like he’s in time out?

The Hall of Presidents is housed in a building resembling Philadelphia’s Independence Hall. The attraction features a short film depicting a historical account of early American presidencies, after which some of the robotic presidents recite lines from their famous speeches. The idea of the film is to celebrate the liberties of the American people and show that the country is forever a work in progress and open to improvements. Like replacing Trump with Biden, for instance.