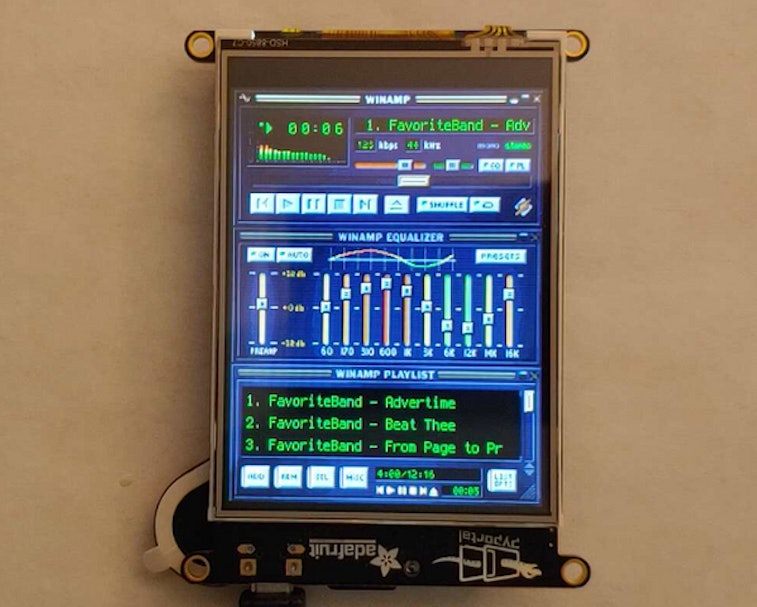 All the ‘90s kids rejoice. Adafruit contributor Tim C has put out a way to relive the beautiful simplicity of Winamp wherever you go. The DIY project converts a DIY device called the Adafruit PyPortal into a standalone MP3 player that looks exactly like the beloved retro media player, which was revived recently.

Just look at that clean old-school aesthetic. It really takes you back to a time where curating a music library took a lot more work than just tapping a few buttons on your smartphone. And Tim C even added a way to install skins onto the Winamp MP3 player, because what’s a Winamp player without a custom skin?

Powered by PyPortal — To build the Winamp MP3 player, you need an Adafruit PyPortal and an external speaker. The PyPortal comes in three different sizes, which all have a highly customizable touch screen that can be programmed for news, stocks, weather, cat photos, or in this case, with Winamp. The PyPortal already has a built-in speaker, but considering its small size, you probably should install a larger external speaker with the PyPortal’s plug-in adapter.

To import music into the Winamp MP3 player, you have to copy MP3 files onto a micro SD card. If you want the artist’s name and song title to show up properly, you have to make sure to include it in the MP3 file name. Just like the golden era of downloading MP3s off Kazaa or LimeWire which were both rife with styling discrepancies.

Although it takes a little bit of extra work, Tim C’s Winamp MP3 player can even read the playlists that you have to manually set up and configure as .json files. You can also create several .json playlists and switch between them, renaming the specific one you want to play as “playlist.json.” It’s definitely an annoying step to go through, but hey, if you wanted it easy, you’d probably just stream music from an app.

There’s also a major caveat with the Winamp MP3 player in that it only has basic functions. Looking at a demo posted on YouTube, the top half of the player pauses and resumes the music, while the bottom half of the screen can go to the next or previous tracks. Unfortunately, the middle portion with the equalizer isn’t actually functional.

Fun project — Tim C has put up all the instructions and necessary parts to build out this Winamp MP3 player on the Adafruit site. There’s no denying that there’s some DIY work involved for a pretty basic standalone music player with just three functions, but Tim C also released the code into the public domain, meaning there’s no stopping those of us with coding chops to improve on the interface.

Even though it’s probably way more convenient to just stream music off Spotify or whatever other platform you’re on, Tim C’s contribution seems like a great DIY project for those who want to stay whipping the llama’s ass.

More like this
Annie Rauwerda
Sep. 19, 2022
Culture
A ragtag community is keeping this aughts Wikipedia gadget alive
Jackson Chen
Sep. 17, 2022
Tech
Zero’s long-range e-motorcycle is a beast on and off the road
Jackson Chen
Sep. 15, 2022
Tech
Unagi goes all in on subscriptions, scraps premium Eleven model