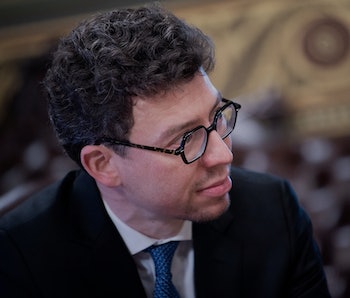 Duolingo will no longer be just a language learning app with a mascot who guilts you into opening the app. The company has announced it’s expanding into math. Sometime next year, the BBC reports, Duolingo will launch an app for teaching math to the masses.

It sounds pretty ambitious, but the company says that it hopes gamification will help the company compete for attention against the likes of TikTok and Instagram. "To build physical schools around the world would cost billions, with smartphones we can reach two-thirds of the human population,” said Duolingo CEO Luis von Ahn. "But the problem with smartphones is they are a double-edged sword — they also come with interruptive things, like TikTok.”

Duolingo went public this summer and now has a valuation of roughly $6 billion. In a filing back in July, the company reported annual revenue from the past year of $161 million, which mostly comes from its premium subscription that removes advertisements and offers other perks. So clearly there’s a lot of demand for the language learning offering, and Duolingo thinks math will open up even more opportunities.

Last year, Duolingo launched a simple app for children that teaches them not a new language, but just how to read.

Gamification works — The “secret sauce,” as they say, is Duolingo’s use of a reward system with digital coins and winning streaks to entice users to continue taking lessons. It also uses notifications which, some have argued, passive-aggressively guilt you into continuing a course. One reads “These reminders don’t seem to be working. We’ll stop sending them for now.”

But Duolingo’s mascot owl has become something of a meme, with people imagining more extreme lengths it could go to encourage engagement. One meme circulated online is of a (fake) Duolingo notification that reads “Looks like you forgot your Spanish lessons again. You know what happens now!” with an ADT security warning of an intruder below it.

All jokes aside, the app also uses other tricks to keep users engaged — von Ahn says that Duolingo will sometimes give users questions that it knows they’re likely to get right. An app isn’t a teacher — you can always just close it and do something else. The idea is that by throwing softballs occasionally, users won’t get too frustrated and ragequit. "The hope is this is how [the new maths app] stands out - but it remains to be seen if it works,” said von Ahn.

It’s probably a bit of hyperbolic to suggest Duolingo could compete against TikTok for people’s attention, but it’s a noble and wholesome pursuit nonetheless.

Not a replacement — Whether Duolingo’s tricks will translate into the math world is a big question. And as a language learning tool, experts generally say that the app is really a supplement to teacher-led lessons and not a full replacement for them. But there’s general consensus that it’s a helpful tool especially for those just starting out learning a new language, and Duolingo has committed to always offering its core service for free, which is hard to hate on.