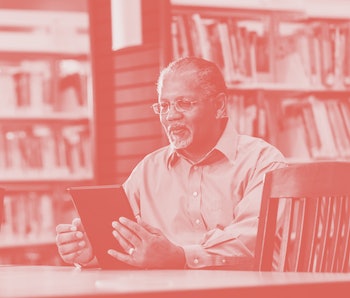 While some libraries across the U.S. are worrying over which books to ban, many others are finding their catalogs overrun by extremely problematic titles — antivaxx ideals, Holocaust denial, white supremacy, you name it. That’s because Hoopla, a bulk ebook subscription service, has been adding these books to its extensive leasing collection, a new investigation from Motherboard reveals.

Hoopla is a service used by libraries to add large numbers of ebooks to their own collections, rather than selecting and leasing each ebook individually, as services like OverDrive allow for. There’s a cost-benefit to this methodology, but it also takes control away from the library and puts it into the hands of this third-party company. More than 8,500 public libraries in the U.S., Canada, Australia, and New Zealand utilize Hoopla.

But how Hoopla builds up its bulk leasing catalog is kind of a mystery, and librarians are finding all kinds of problematic titles in their circulation, including those promoting LQBTQ+ conversion therapy, anti-Semitic views, and white supremacist rhetoric.

Easy to find — When a group of Massachusetts librarians came across Holocaust denial ebooks in their collections earlier this year, Hoopla was ready and willing to take them down. Hoopla CEO Jeff Jankowski’s response essentially boiled down to: oh, our publishing network put those there, and somehow they made it through the moderation system.

But Motherboard found that there are plenty of other bad apples in the Hoopla system — and you don’t even need to do much digging to come across them. Searching for terms like “abortion” and “homosexuality” revealed a number of self-published religious texts with titles like Can Homosexuality Be Healed on the first page or two of search results.

Oversight, please — While, yes, Hoopla has removed problematic titles brought to its attention, the whole ordeal really highlights just how little the company knows about its own collections. It’s also a bitter reminder that moderation oversight isn’t just a topic that needs to be discussed in the context of Big Tech; smaller companies’ moderation methods can be similarly impactful.

Ideally, libraries would be able to curate their own ebook collections. But individual ebook licenses can be very expensive for libraries, costing significantly more than the same ebook would for a consumer. Some lawmakers have tried passing legislation that prohibits this kind of price-gouging, but none have been successful.

Until meaningful laws are passed in this arena, companies like Hoopla will continue profiting from libraries’ need for ebooks. Librarians are hopeful that, by raising awareness about the service’s moderation issues, the company will be forced to reckon with its shortcomings and, perhaps, open more dialogue between library groups and Hoopla.