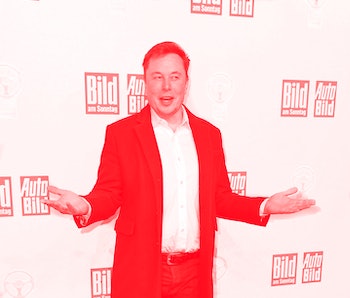 SpaceX and Tesla CEO Elon Musk has tweeted his support for Twitter CEO Jack Dorsey. “Just want say that I support @Jack as Twitter CEO. He has a good ❤️,” Musk tweeted on Monday. Dorsey’s had a tumultuous year, and an especially turbulent week, as reports emerged showing a Trump-supporting activist investor is buying up stock to try and have him removed from the helm at Twitter.

I am Jack’s growing sense of dread — For added stress, shareholders appear to support the idea of someone other than Dorsey leading Twitter, because the company’s stock climbed on the back of the ouster rumors. The move comes after Dorsey spoke of plans to relocate to Africa for a protracted period without a clear contingency plan for leadership at Twitter in his absence. Some shareholders voiced their concerns about the executive’s ability to run the company from afar.

At least Dorsey won’t have to add “contracting the coronavirus” to his list of worries as Twitter has canceled all non-essential travel, which includes Dorsey’s planned trip to speak at SXSW.

Musk has weighed in before — This isn’t the first time Musk has commented on his pal’s actions. Back in January, he offered advice on how Dorsey could improve Twitter. His advice boiled down to getting to grips with the fake accounts and bots on the service that spew hate, seek to down out legitimate accounts, and attempt to shape conversations.

It’s always heart-warming to see billionaires sticking up for one another, particularly when one of them has fallen on hard times. But good heart or not, without some major, shareholder-reassuring actions, Dorsey’s in for a tough time hanging onto the reins at Twitter.