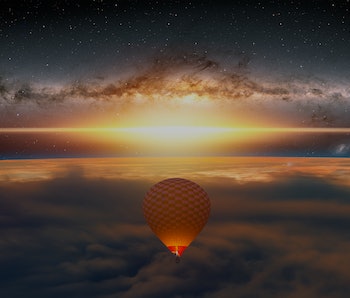 Solar geoengineering is a controversial branch of science focused on reflecting sunlight back into space in order to cool the planet. Harvard University scientists moved the planning for a June 2021 balloon test flight to Sweden late last year due to COVID-19 restrictions stateside. There was immediate backlash from critics, and now, The Guardian reports that an independent advisory committee will decide whether or not to allow the test flight on February 15.

Why is this controversial? — Solar engineering, also known as solar radiation modification, is being pursued as a way to cool the Earth by pumping the stratosphere with reflective particles, most likely sulfur dioxide. Opponents believe that this approach could have far-reaching effects on ecosystems on the planet, make the use of fossil fuels feel consequence-free, and potentially, irreparably damage the stratosphere.

It’s likely we’re all fans of the stratosphere, as far as planet-insulating features go, so it’s only natural that organizations like the Swedish Society for Nature Conservation, Greenpeace Sweden, and Friends of the Earth Sweden are up in arms about Harvard’s research.

Harvard’s Stratospheric Controlled Perturbation Experiment (SCoPEx) eventually hopes to run tests on the release of calcium carbonate, a commonly-found mineral dust, and possibly some actual sulfates into the stratosphere. June’s test flight would not involve the release of any substances. Environmental activists still consider the test flight a stepping stone toward the “dangerous, unpredictable, and unmanageable” adoption of this technology, according to The Guardian.

Proponents of this kind of research claim that it can offset the warming effects of climate change while we wait for nations and industries to course-correct their carbon emissions. It doesn’t, however, actually do anything about all the trapped carbon dioxide, and it’s not a long-term solution.

The system would require the constant release of particles by modified aircraft. Similar to when you stop using Rogaine or an eyelash lengthener and your hair returns to its original state, suddenly halting solar engineering could lead to rapid warming, not to mention other myriad unintended — and unforeseen — consequences.