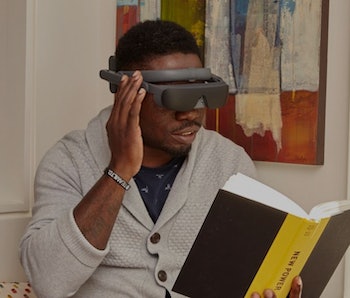 Most wearable headsets on the market today focus on either augmented or virtual reality applications that can enhance everyday life with fun and useful applications. A company called eSight, however, makes visual assistance headsets that give some normalcy back to people with impairments such as low or blurry vision. Its new eSight 4 headset looks reminscent of something like an Oculus, but these goggles improve the wearer's baseline eyesight by capturing everything they see through a camera and pumping up its brightness and contrast.

Highly customizable to context — eSight says that its headsets change lives by allowing people to return to activites they lost because of poor vision, like studying in a classroom or playing video games. The eSight 4 has two OLED screens inside with a resolution of 1280x960, up from 1260x768 in its predecessor, and the maximum brightness is supposed to be doubled. The camera on the front is only 18 megapixels now, down from 21.5 megapixels in the eSight 3. The company says that this should be fine when accounting for other improvements.

Much like Microsoft's HoloLens, the eSight has a limited field of view, meaning the wearer can only see enhancement within a 37.5-degree area of their vision. Within that area they can use a built-in trackpad or mobile app to do things like magnify objects with up to 24X zoom, dim the lighting, and enhance the contrast of text. With different vision modes, wearers can quickly change contrast and color details based on their environment, like if they're outdoors walking or inside watching TV. eSight 4 even supports projecting a smartphone or computer screen into the headset.

Turning the world up to 11 — eSight says its headsets can help people with over 20 different eye conditions, and wearers typically have a visual acuity of 20/60 to 20/800. With an ability to adjust the distance of the screens and their depth relative to conventional glasses, the company claims wearers can achieve up to 20/20 visual acuity.

The eSight 4 only lasts about three hours on a charge, but the headset comes with two batteries that are magnetically attached to be easily swapped out. A floating bar above the headset holds the batteries and is lined with fabric for comfort.

At nearly $6,000 it might not be super accessible to everyone, but there's an option to finance the eSight 4 for $99 per month. People with visual impairments already often rely on their smartphone's camera to navigate the world using apps that magnify their surroundings but those aren't nearly as comprehensive as eSight. The eSight may be worth it if it can allow people to return to the activities that make them happy.