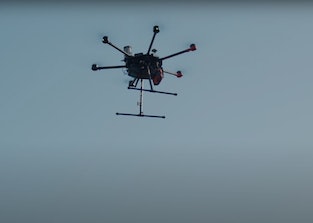 Number of people in Sweden Everdrone says its drone technology will reach.

It goes without saying that cardiac arrests are terrifying, especially if paramedics cannot arrive on time. In an effort to bring tech and life-saving procedures together, Everdrone announced that it has initiated its very own drone system that would bring Automated External Defibrillators (AEDs) to patients in Sweden. The company says that its plan is to deliver these AEDs to over 80,000 people in Sweden.

How it works — Situated in the Gothenburg area of Sweden, Everdrone drones will take up 112 emergency calls for people within a radius of six kilometers. Once the call is made and the address is provided, Everdrone operators will send a drone and will be ready on call to provide instructions to bystanders. The drone itself will hover at 30 meters altitude so as to avoid hurting people.

"The collaboration with SOS Alarm and KI has been absolutely crucial for the realization of the concept in terms of being able to perform a swift alarm response, and to manage the medical and ethical issues involved," said CEO Mats Sällström.

"We have performed countless test deliveries in recent months," Sällström reassured the press, "and the results show that the method works very well."

Well done, Everdrone — It's hard to imagine a future where drone technology enjoys a wholly positive reputation. Given its ubiquity in warfare and the civilian damages it has caused alongside its surveillance risks, autonomous drone technology has a long way to go before people can happily view it as conducive to medical and social well-being.

With Everdrone's investment in civic applications, however, this could change — for the greater good. When you consider the statistics that note at least 275,000 people in Europe have out-of-hospital cardiac attacks, an AED dispatching drone sounds like an altruistic venture.