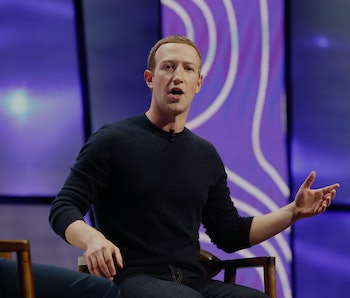 On Thursday, Facebook CEO Mark Zuckerberg publicly announced his company's official position on re-opening in-person business and conferences. Resuming life as we knew it before COVID-19 struck will have to take place in "staggered waves" to minimize the potential for a second peak in the country and around the world, according to Zuckerberg.

CNET corroborated the CEO's points and reports that previously planned local events for the F8 conference have been called off as well. A spokesperson for the social network told the outlet, "Because we can't come together in person for F8 this year, Mark Zuckerberg and other Facebook leaders will do a series of updates throughout the year to share what we're working on to help people connect, as well as updates to our developer products, where applicable."

Facebook scales back — Facebook has evidently shifted gears in just a few weeks. After the F8 developers conference was called off in February and lockdown orders were not official yet, Facebook pointed toward local events as an alternative. Now, that option has been ditched, too. It is possible that the first update for the conference will involve a plan for video conferencing through Facebook's messaging platform.

Remote work through May — According to Zuckerberg, the majority of Facebook employees will have to work from home through May "at least." The workers who may be required to operate on site include content moderators and hardware engineers. After most of the Facebook workforce returns to its various offices, Zuckerberg noted that those who still feel vulnerable can request to work remotely through the summer of 2020.

Facebook's COVID-19 response — Facebook is known for favoring in-person meetings and conferences as it says these interactions apparently bolster efforts to create "the best possible services for our community."

For its own part amid COVID-19, the social network has attempted to streamline remote work for its employees. But Zuckerberg's business has witnessed a considerable amount of difficulty during this time, including glitch-riddled videoconferences, company higher-ups cracking down on idle chatter between cooped up workers, and a gaping hole in Facebook's content moderation ecosystem. The network has suffered an ad slump due to the outbreak, and digital marketing analysts estimate that both Facebook and Google could lose over $44 billion in global ad revenue this year.

Ditching a full F8 developers conference as well as its alternative is most probably agonizing for Zuckerberg and his team — after all, these conventions boost profit and publicity — but it ought to be seen as a contribution toward larger scale efforts that very well could flatten the curve.