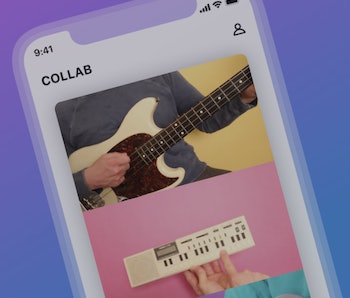 On Wednesday, Facebook announced Collab, an app that helps users make music with friends. The iOS app is currently available through an invite-only beta, probably so its imminent failure can only be viewed in a small circle. The app tries to mimic the musical collaboration being fostered on TikTok and tailor itself specifically to this segment of TikTok users.

TikTok, is that you? — Instead of duets, Collab tries to differentiate itself by allowing three videos to play simultaneously instead of two. It’s different, see? Like duets, it seems like additional “remixes” will be possible, but it’s unclear how this will affect video size. Users can also swipe through different clips to get that perfect bass or cowbell and adjust the volume of each clip. If you, for whatever reason, need to hear “Senorita” again, you can get a sense of the functionality in the following video.

Speaking of video formatting, Collab throws a bone to landscape videos by stacking the three clips on top of each other instead of next to each other. Though users would benefit from shooting their clips horizontally to avoid awkward crops, it doesn’t seem necessary, and the final video will still be vertical. These videos can be shared anywhere, but will obviously integrate more smoothly with Facebook’s properties.

Sweetie, stop — Facebook is allegedly rushing the release of Collab due to the pandemic in order to help users feel more connected. It definitely has nothing to do with the goldmine of creativity coming out of quarantine TikTok videos. Facebook previously tried to steal TikTok’s thunder with the underwhelming Lasso app and tested Instagram “Reels” in Brazil. Following those lackluster performances, it finally updated the IGTV app to bring it into 2020.

Collab is now the fourth attempt by the social media giant to capture the magic of TikTok — and it isn’t even fully baked. Facebook usually tries to just buy its way out of having to innovate, but it seems intent on sinking money into competing with TikTok. The company walked away from acquiring Musical.ly in 2016 and now it seems to be playing some serious catch-up.

Whether it’s the sting of missing out the first time around, residual hurt feelings from Snap’s rejection, or all the federal antitrust probes looking into Facebook’s acquisition practices, the company is choosing to compete for the first time in years by building its own apps. And as time has shown us, it’s not great at that.