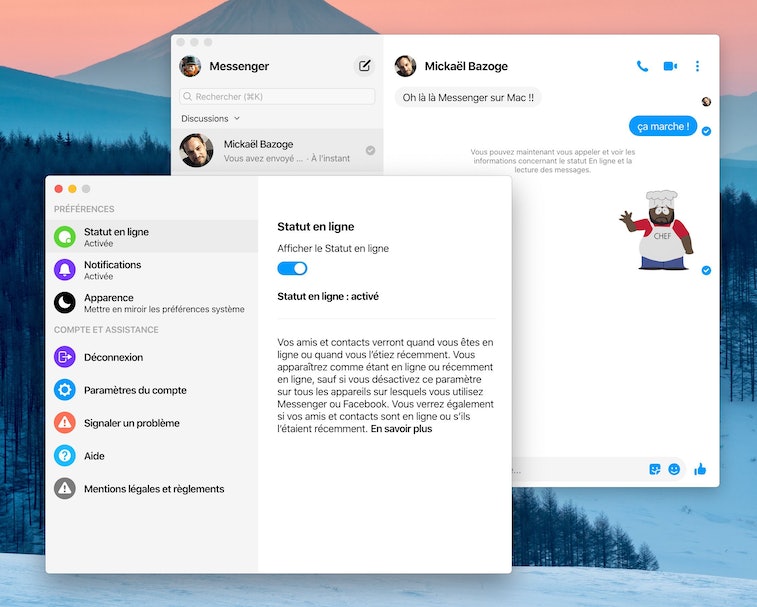 Almost a year after announcing it would do so, Facebook quietly added a desktop Messenger app to Apple’s App Store in some markets. MacGeneration spotted the app in the French App Store on Wednesday, but it doesn’t appear to be a widespread release just yet. The macOS app mirrors the iOS version, which recently got a serious upgrade, and supports macOS’s Dark Mode.

Four years after a Windows version — The Messenger desktop app for Windows was released in March 2016. If it’s any consolation, in those four years, the app has amassed thousands of reviews culminating in a paltry three stars. Ideally, this lengthy delay will mean a better app experience for Mac users. But then, we're not banking on it. This is Facebook we’re talking about, after all.

It’s no secret Facebook previously focused its efforts on the mobile versions of Messenger, particularly the Android app, which has the most users globally. Further, the prevalence of iMessage and the ease of switching between an iPhone and a Mac desktop or laptop while using it has made Messenger a tougher sell for die-hard Apple fans. Now, though, Facebook is pivoting to private messaging and it hopes features like Marketplace and Stories will further encourage more people to use Messenger, even Apple stalwarts.

Testing, testing — The desktop app was built using Electron instead of Catalyst, which is the less secure of the two, and thus a strange considering Facebook is desperately trying to implement end-to-end decryption by default. Outside of France, TechCrunch also managed to find desktop Messenger apps in Mexico, Poland, and Australia's App Stores. We poked around several other markets, including India, Brazil, and Germany, to no avail.

“We’re conducting a small test of the Messenger app for macOS in a couple of markets,” a Facebook spokesperson told TechCrunch, who wasn't able to confirm when U.S. users can expect it.

On the heels of a lighter iOS app, a Mac Messenger app, even in beta, suggests Facebook is angling for Apple’s iMessage base. Like the fresh iOS version, the desktop app looks streamlined, focusing on text, video, and photo messages. With the declining public opinion of Facebook, though, it might be too late to siphon growth from such an entrenched competitor, at least in the U.S. where iMessage is so prevalent and, unlike its Android equivalent — the very-late-to-market RCS — loved and revered.