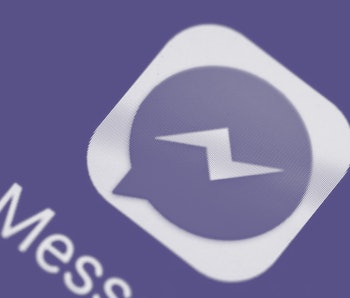 If you want to sign up for Facebook Messenger, you can no longer escape Big Blue — you’ll need an account from now on. The company has stopped allowing new users to join using a phone number.

“We found that the vast majority of people who use Messenger already log in through Facebook and we want to simplify the process,” a spokesperson told VentureBeat. “If you already use Messenger without a Facebook account, no need to do anything.”

Facebook has said that Messenger has over 1.3 billion users. The company spun messaging out of its main app in order to create Messenger, and in 2015 began allowing users to join without a Facebook account. The app has slowly begun featuring advertising, and businesses can provide customer service through Messenger as well.

Unifying Facebook’s messaging apps — Facebook is working on unifying its suite of messaging apps including Messenger, Instagram, and WhatsApp, with the idea being that users will be able to message their friends no matter which app they’re using. VentureBeat theorizes that phone number signups would make this transition difficult. Facebook CEO Mark Zuckerberg has said the move towards interoperability will guarantee that conversations are encrypted, because users won’t have to move to an unsecure app in order to converse with their friends.

The company sees opportunity in private communication as the public has soured on Facebook’s old “connecting the world” mission due in large part to rampant misinformation and data scandals.

Messenger antitrust concerns — Some have argued the real intention of unifying the apps is to make it difficult for regulators to break up Facebook should they rule against the company in one of several ongoing antitrust cases. The FTC is reportedly considering an injunction that would temporarily block Facebook from integrating the apps. By making Facebook’s messaging products interoperable with one another, the FTC believes independent messaging apps would have a harder time competing. Facebook’s collection of messaging apps are some of the biggest in the world, with a combined billions of users (although there’s surely some overlap). Under interoperability, the incentive to choose a Facebook-owned communication app would be significant.