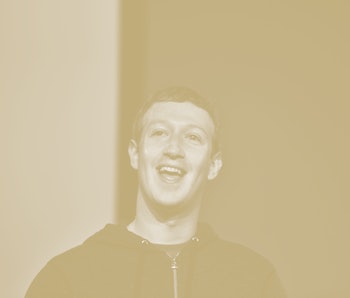 Facebook will begin presenting users with more feedback surveys meant to improve their experience reading the News Feed. The company is responding to complaints that the News Feed circulates too much political content that makes people unhappy.

“Increasingly, we’re hearing feedback from people that they’re seeing too much content about politics and too many other kinds of posts and comments that detract from their News Feed experience,” Facebook writes in a blog post. “We’ll work to better understand what kinds of content are linked with these negative experiences.”

Facebook regularly changes its algorithms to emphasize different types of content, in the past reducing the amount of news stories people see in favor of more content from friends and family.

Engagement metrics — As part of the new initiative, the company will ask users if certain content in their feeds is “inspirational,” and try to gauge their interest in specific topics. The goal is to help users customize their News Feeds to their specific interests, but also focus less on showing users content based on engagement.

Immediate reactions to a post might not mean people actually like the content in question — they may be responding negatively to an article they haven’t even scrutinized. But the high engagement triggers algorithms to circulate the post more and more, creating a vicious cycle in which users are constantly bombarded with negative content.

“While engagement will continue to be one of many types of signals we use to rank posts in News Feed, we believe these additional insights can provide a more complete picture of the content people find valuable, and we’ll share more as we learn from these tests,” says Facebook.

Took long enough — CEO Mark Zuckerberg first said back in January that he hoped to reduce political content in the News Feed, and the company has been experimenting with tools to reduce its presence. “People don’t want politics and fighting to take over their experience,” he said.

It feels like these changes could have happened sooner — like, years ago before sensationalist misinformation was allowed to spread in the News Feed. For many, the entirety of 2015 to now has been a negative experience on Facebook.

Tailoring the News Feed based on interests won’t necessarily reduce polarization, as it could silo people in their own bubbles of information. But at least prioritizing interests and posts of an “inspiring nature” could help slow the spread of misinformation. That’s probably wishful thinking, however.