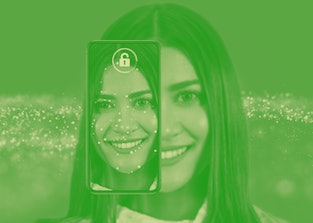 Despite all the obvious social and privacy consequences, facial recognition software continues to rise in popularity. Likewise, using smart devices in lieu of debit and credit cards is increasingly a preferred payment method for consumers looking to minimize contact with the world around them. Though it shouldn't come as a surprise, we remain extremely unamused at the combination of these two trends being exploited by the payments industry, which is capitalizing on the COVID-19 pandemic to boost interest and usage of facial recognition for buying goods and services.

Distancing yourself from COVID-19, and privacy — According to a report today in the LA Times, a new, California-based company called PopID founded by an entrepreneur named John Miller has recently introduced a facial recognition payment app for retailers looking to streamline their transactions and reduce wait times, while also cashing in on consumers’ social distancing concerns during the COVID-19 crisis.

“After users register for the service, he wants to build a world where they can ‘use it for everything: at work in the morning to unlock the door, at a restaurant to pay for tacos, then use it to sign in at the gym, for your ticket at the Lakers game that night, and even use it to authenticate your age to buy beers after,’” writes the LA Times, with Miller adding that, “You can imagine lots of things that you can do when you have a big database of faces that people trust.”

It's the part about having “A big database of faces that people trust” that's most worrying.

100 million and counting — Despite many consumers’ concerns, facial recognition-assisted commerce is nothing new in countries like China, which last year saw over 100 million people sign up for services similar to PopID after numerous 7-Eleven convenience stores implemented the option. Last month, people in the city of Guiyang, China could even begin paying public transit fares using facial recognition software.

Convenience has always been one of the biggest marketing tactics used in such programs, but with the onset of the COVID-19 pandemic, the industry is facing an unexpected, easy-to-exploit consumer trait: fear of contact-based solutions.

Contactless transaction services like Apple Pay are relatively new to the marketplace, but already an estimated forty-eight percent of iPhone users have enabled the service on their devices. Meanwhile, contactless cards are only really starting to roll out in the U.S. now, despite being broadly accepted in the EU, UK, Australia and even parts of Africa for years. Options like PopID take the social distancing possibilities contactless solutions one step further, requiring no physical interactions at all between retailers and consumers. Contactless cards still often have to be pressed to a terminal, making their name something of a misnomer.

“When the coronavirus began to spread rapidly in the spring, [PopID] quickly adapted its face-scanning tablets to serve as contactless employee check-in devices with built-in temperature screening. Pop Entry, as the system is called, has sold over 1,000 units in recent months, with several thousand more set to be installed by the end of the year, according to the company,” reports the LA Times, while also mentioning that many experts are skeptical of temperature checks’ effectiveness.

Despite Miller's reassurances that PopID's software requires explicit customer opt-in and has a range of privacy-protecting measures in place to ensure data isn't compromised, recent shady, coercive, and downright despicable uses of facial ID technology don’t inspire the greatest confidence. Plus, we should all mask up for the conceivable future even if it messes with facial ID. Or perhaps that's actually just an added benefit.