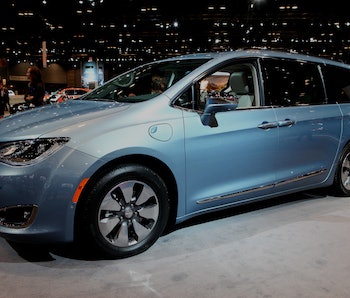 Fiat Chrysler Automobiles (FCA) is partnering with Chinese startup AutoX to bring autonomous minivans to China, the two companies announced this week. The AutoX AI Driver Platform will be installed in Chrysler Pacificas set to appear in select cities including Shenzhen and Shanghai in the first half of 2020.

“The AutoX AI Driver is the most experienced driver for the unique traffic situations in China,” wrote AutoX in a blog post. “With tons of real world data we have collected in the past few years, the AutoX Driver has adopted local driving styles in China to navigate in complex and dynamic urban conditions.”

Fiat Chrysler's autonomous strategy — Bending metal is what FCA does best, and as such supplying vehicles to companies who provide the brains seems to be the strategy it has chosen in entering the self-driving space. Waymo, for instance, already uses the same Chrysler Pacificas for its program in Arizona. By supplying vehicles and leaving the software to others, FCA is hedging its bet a little bit by getting a piece of the action but not sinking too much money into costly R&D. The company is planning to develop electric and internet-connected vehicles in partnership with Foxconn, however.

FCA will have competition — Self-driving cars have been permitted on public roads in China since 2017, with many of the local tech giants working on self-driving vehicles in some form or another. Volvo, Ford, and Volkswagen are all actively developing self-driving tech in the country.

Skeptics of self-driving technology say that we’re still many years, even decades, away from the mass rollout and adoption of autonomous vehicles. Others argue that investments in public transit would be a better use of resources because trains and buses can accommodate many more riders and are both safer and more environmentally friendly than cars. Either way, investment in the space doesn't seem to be letting up.