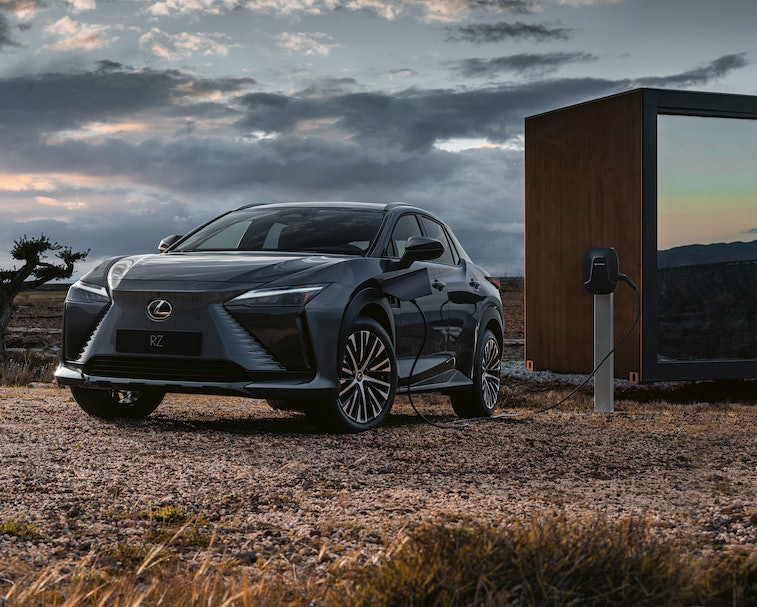 ‘Tis the season for car announcements, apparently. Lexus just unveiled its first vehicle ever built from the ground up to be fully electric, though its inner mechanisms are kind of old news at this point since the Lexus RZ is built upon the same e-TNGA platform used in Toyota’s bZ4X and Subaru’s Solterra.

This may be Lexus’s first real step into the EV market, but the company is not exactly unfamiliar with the territory, as it points out in its press release. The first hybrid Lexus — the RX400h — debuted in 2005, just a few years after Toyota’s Prius touched down on U.S. soil. Lexus has also introduced other “electrified” versions of its gas-guzzling models in the years since.

Though the new RZ is very much in the same family as the bZ4X and the Solterra, it’s also significantly more luxurious than its siblings. This is Lexus, after all.

All three share a similar body shape, too, as is quite obvious when viewing them in a line-up. The Lexus definitely looks a lot more like Lexus’s current lineup than either of the other two.

A number of interior upgrades have been granted to the RZ, including infrared heaters at knee-level in the front seating areas and a dimmable panoramic roof. The RZ also includes Direct4, Lexus’s intelligent force distribution system. The interior is also just generally more spacious, both in the front and the back, than the other e-TNGA models. Expect those upgrades to make the RZ a little more expensive than the rest of its family.

For those wondering: Yes, there is a steering yoke option. The bZ4X was originally announced with a steering yoke, too, but it’s disappeared from more recent photos, leaving us wondering whether or not it will find its way to the U.S. market.

Moving forward — Lexus says the release of the RZ is the beginning of its transition into a “BEV-centered brand.” The company has set itself a significant goal of completing a full lineup of EVs in every category by 2030, and just five years later it hopes to have moved to 100 percent all-electric sales.

The success of these initial EV offerings from Toyota and its sub-brands will be pivotal in how each moves forward with the electrification of its lineups. It’s clear that Tesla’s vice grip on the EV market is about to become a bit more slippery.