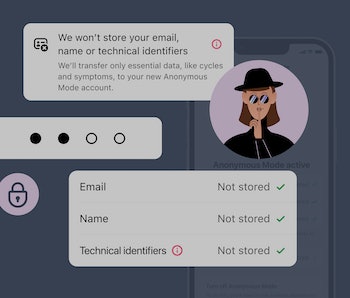 Popular fertility app Flo is rolling out a new “Anonymous Mode,” a privacy feature the company first promised mere hours after the overturning of Roe v. Wade. The addition is particularly notable given that Flo is currently facing a class-action lawsuit for sharing users’ health information without consent.

“Flo will never share or sell user data, and only collects data when we have a legal basis to do so and when our users have given their informed consent,” said Susanne Schumacher, Data Protection Officer at Flo, in a press release about Anonymous Mode. “Any data we do collect is fully encrypted, and this will never change.”

Going incognito — Turning on Anonymous Mode removes all identifying information from your Flo account, including your email and name. It’s like using the app without an account, which means users taking advantage of the feature won’t be able to move their data to a new phone.

According to Flo’s Anonymous Mode white paper, the Flo app will create an entirely new anonymous profile once the new feature has been turned on, allowing the app to transfer over only the most necessary information. The white paper also dives deep into “Oblivious HTTP,” a protocol developed by Cloudflare and Mozilla, which uses a relay service to separate user data from IP address data.

A new standard? — Flo says it hopes its work on Anonymous Mode will inspire other health-tech companies to implement similar features of their own. We’d have to agree: most tech companies profess their love for user privacy, but few actually put in the work to make that privacy a reality.

Private companies do have a responsibility to protect their users, but the government has been no help at all in this effort, either. The U.S. has such lax data privacy protections that senators have had to repeatedly nudge the FTC toward finding solutions.

Anonymous Mode is available for all Flo users on iOS now; an Android version of the feature is set to launch next month.