Flying paramedics are coming to save us from ourselves 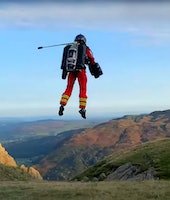 How long, in seconds it takes to make a trip with the jetpack that would otherwise take 30 minutes.

If there’s anything holding back paramedics from saving lives, it’s gravity. Tech researchers have a solution in mind: a custom jet pack suit for flying to those in need of assistance.

Gravity Industries and the Great North Air Ambulance Service(GNAAS) have been in talks to create a jet pack suit for almost a year, and now the project is finally coming to fruition. A test flight was carried out in England’s picturesque Lake District this month with great success.

The biggest advantage here is the time saved. In a mountainous environment, for example, paramedics might be able to reach the top of a trail in a minute and a half — a trip that would have taken at least half an hour by car.

When every passing second could mean the difference between life and death, those shaved minutes could literally save lives. Though, of course, the jet pack will need to be refined and made much more affordable before it can be used on a wider scale.

Awesome — The director of operations at GNAAS, Andy Mawson, came up with the idea about a year ago.

“We could see the need,” Mawson said. “What we didn’t know for sure is how this would work in practice. Well, we’ve seen it now and it is, quite honestly, awesome.”

The jet pack suit has two mini engines on each arm and one on the back. This allows the wearer to navigate and control their speed with just hand motions.

Some barriers to entry — Obviously the ability to fly up a mountain is a game-changer for paramedics. There’s also a good reason this technology hasn’t been developed or tested before: it’s expensive and dangerous.

The problem is still gravity. You can attach as many little engines to your arms as you’d like — gravity is still working against you. The jet packs give you a sure leg up over those of us who don’t have propellants attached to our bodies, but what happens if the suit malfunctions? Then you have a downed paramedic and a person waiting for help. You don't want to end up with wrecked paramedics piling up on mountain trails all trying to get to one another.

Putting jet pack suits into wider use around the world isn’t going to happen any time soon. The cost of the suits alone — as well as that of training paramedics to safely use them — is inherently prohibitive. Still, though, the idea has merit, and it could actually save lives once the tech is less of a prototype and more of an obtainable reality.