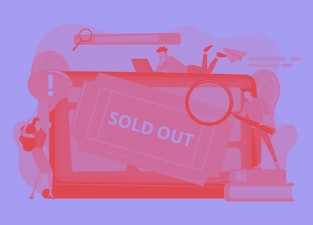 The Better Online Ticket Sales (BOTS) Act is finally getting used, and a few scalping companies are in its crosshairs. The Federal Trade Commission (FTC) went after three companies for their alleged use of automated software in order to buy and resell tickets to popular events.

The original judgment called for the three ticket brokers to fork over $31 million, but most of the fine was suspended due to their inability to pay.

Bye-bye bots — The BOTS Act went into effect at the very end of the Obama administration only to be completely ignored during the Trump administration, to the point where Ticketmaster had to find its own justice. The law prohibits companies from using “technological measures” to get around ticket limits and then selling tickets obtained from this process.

Newly appointed Acting Chairwoman Rebecca Kelly Slaughter is finally taking the law for a spin — at Cartisim, Just In Time Tickets, and Concert Specials’ expense. After raking in roughly $26.1 million from 150,000 tickets for a variety of events, the three companies will only have to pay $3.7 million in fines, pending judge approval.

Live performances are taking a massive hit thanks to the pandemic, so it’s only natural that scalpers’ bottom line would be affected. If their finances were misrepresented, however, the brokers will have to pay the unamended fine.

In her concurring statement, Slaughter made her stance on scalping clear, and we can expect to see the BOTS Act enforced more often: “When live events return, so too no doubt will the bad actors who use advanced technology to game the system for profit — but now they will have to consider the risk that, if they get caught, they will not only have to disgorge the profits they made from cheating but also pay a penalty that may be many multiples thereof.”

Why now? — The commission voted 5-0 on this judgment, a layup for the incoming Slaughter who previously served as a Democratic commissioner. This administration’s FTC is expected to keep bringing the hammer down on Big Tech. Until a new commissioner can be confirmed, bigger decisions may end up deadlocked once former Chairman Joe Simons officially steps down at the end of the month.