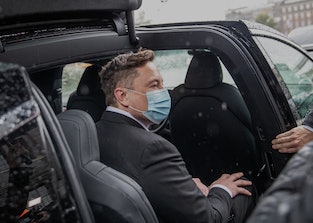 The quantum of the fine leveled by German regulators.

Regulators in Germany have hit Tesla with a $14 million fine for failure to comply with local battery recycling obligations. The automaker has objected to the fine, saying that it properly recycles the batteries from its cars and instead failed to meet certain administrative requirements.

Recycling car batteries – Since Tesla is still a young company, especially in Europe, there aren't many Tesla vehicles yet on the roads that have actually reached their usable end-of-life. But when the company does replace a battery, it typically recycles the old one by stripping it for parts that can be used in future replacements.

The issue in Germany appears to relate to how Tesla deals with batteries that are damaged in an accident and can't safely be reused. Tesla is supposed to offer customers a disposal partner that can safely discard the damaged cells but has failed to communicate instructions for how to do so to customers in a timely manner.

The batteries in electric cars can be very dangerous if ruptured and have to be submerged in water for days at a time after a crash. Fire departments have reported putting out fires in Tesla's only to see the batteries erupt in flames again days later.

Tesla is building a large manufacturing plant near Berlin, Germany, where it plans to build Model Y vehicles. The cost to build the factory — dubbed Giga Berlin — is estimated to be around €4 billion ($4.6 billion). It's also planning a new factory in Austin, Texas, as the company seeks to move production out of California where CEO Elon Musk has gotten into frequent tussles over state regulations, and because the company wants to be able to build its custom batteries closer to the vehicles they'll end up in.

The company hasn't had a great relationship with officials in Germany either, however. The company has been told that it cannot advertise its cars as autonomous using the "Autopilot" branding, which suggests a higher level of independence than is actually possible. That's a position many critics agree with.

Environmental regulations — Whatever you think about complex German regulations, it's good the government isn't turning a blind eye to environmental regulations just because Tesla is building a large factory there. The country recently saw its star tech company Wirecard collapse after it emerged that financial regulators were willing to overlook a lot of red flags because they wanted Germany to be seen as the next Silicon Valley.

Tesla is not a scrappy startup and shouldn't be treated like one — it's fair and necessary to regulate it to the same high standards as other automakers.

And the $14 million fine won't affect Tesla's operations anyway, so we should still see the "rave cave" ready for use by around July 2021.