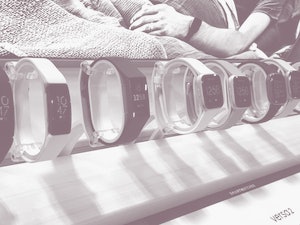 In a clear attempt to compete with Apple’s smartwatch dominance, Google has announced that it’s acquired fitness wearable pioneer Fitbit for an estimated $2.1 billion. Google says it plans to incorporate it into its Wear OS for future devices.

The news comes after an embarrassing Q2 2019 for Fitbit where it reported just 4.8% growth in the same period in 2018. In comparison, Apple’s "wearables" category grew by 48%.

Reigning champ — Apple’s wearables category is actually “Wearable/Home/Accessories,” which means the reported numbers account for AirPods, Apple TVs and the like alongside the Apple Watch. Still, Canalys reported that Apple shipped 1 million more wearables than Fitbit. Even when combined with Fossil — another company Google recently purchased — the combined shipments total 2.2 million, compared to Apple’s 2.9 million.

So what? — We’ve yet to see how Fitbit performed in Q3 2019 prior to Google’s acquisition. Fitbit is set to announce its third-quarter earnings on November 6.

Analysis of the wearables market doesn’t lean in Fitbit's favor: Emarketer predicted that in 2019, consumers would be more likely to opt for smartwatches than athletic products, and thus far, the numbers back it up. If Google wants to catch up to Apple, it'll need to do more.

Stiff competition — It doesn’t seem likely that Google will outsell Apple anytime soon. Sure, acquiring Fitbit buys Google market share, but Apple is so far ahead (at least in North America), it may be impossible to catch up. It’s going to take serious innovation — rather than a copy-paste of the competition — to catch up to Apple.