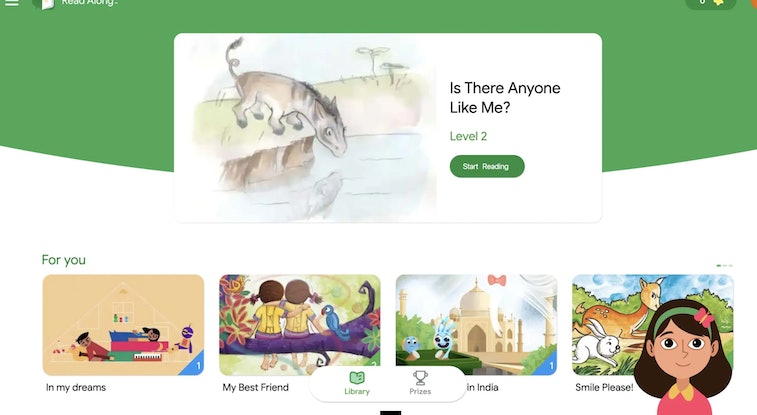 Google has released a browser version of its Read Along Android app, which offers digital storybooks with tools to help kids learn how to read. Kids can choose one of the hundreds of stories at various levels, read into the microphone, and watch the site evaluate their performance. Words turn blue once they’re read, to help you know your place. If you totally mispronounce words, a red underline will pop up to alert you of your problem. The Read Along mascot, Diya, will appear on screen to show you the proper pronunciation.

Previously, Read Along was available in India in 2019 with the name Bolo. The next year, it was released globally as Read Along. Since then, Google says it has helped more than 30 million kids read 120 million stories. It’s available in ten languages: English, Portuguese, Spanish, Hindi, Marathi, Bengali, Tamil, Telugu, Gujarati, and Urdu. The latter six languages are widely spoken in South Asia.

It’s meant to supplement — The product, targeted at learning readers ages five and up, isn’t branded as some sweeping replacement for human teachers or parent connection. Instead, it can help fill the gaps when one-on-one adult instruction isn’t available.

Google’s team is interested in making the service fun for kids. “In addition to the website launch, we are also adding some brand-new stories. We have partnered with two well-known YouTube content creators, ChuChu TV, and USP Studios, to adapt some of their popular videos into a storybook format,” it said in a post.

The difference between this and the existing app — It’s better for use in schools, which may have computer labs. Unlike the app, the browser version doesn’t support offline use. The browser version also requires a Google account to sign in, which can keep track of kids’ progress and provide in-game incentives. But otherwise, the browser version is similar to the Android app. And both the app and web version process speech recognition locally instead of sending voice data to servers.