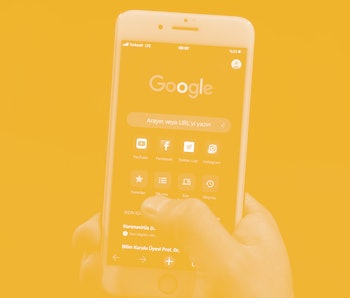 You suck at spelling, and that's a problem for Google. Its whole search business relies on figuring out what you want and serving that to you as quickly as possible. As such, the company invests a lot of resources in sophisticated spellchecking, and today the search and advertising behemoth announced it will soon be rolling out a new spelling algorithm that promises even better suggestions for misspelled words.

Google made the announcement during its "Search On" event this week. During the same event, it also unveiled a new search feature that lets users search for a song by humming or whistling it. Google says that 15 percent of search queries each day are ones that it's never seen before, and that's largely because they're straight-up misspelled.

According to Cathy Edwards, VP of engineering at Google, one in every 10 Google searches is misspelled. That means hundreds of millions of misspelled searches each day. So, how does it work? Artificial intelligence that's able to make sense of context.

Feedback loop — Google already has the "did you mean" feature that suggests proper spellings, and soon the feature will be updated with the new spelling algorithm that's powered by a neural net with 680 million parameters and can run in under three milliseconds after each search. In the simplest terms, the algorithm looks at millions of misspellings users make each day, and each time a user chooses a spelling suggestion they're training the algorithm on what they meant to say.

Another small change that Google is making to search is that it will be able to index individual passages from webpages instead of just the whole page. If you search for, "how can I determine if my house windows are UV glass," the algorithm will be able to find a single paragraph on a webpage that answers your question and pull that out. Previously, Google would surface a page if it was confident the page might answer your query, but it wouldn't dig out any individual paragraph.

An uneasy relationship — Some publishers are uneasy about this type of scraping by Google because they believe it reduces traffic to their sites and gives Google all the value for the information they worked hard to create. Google argues that these passages drive traffic to websites that are frequently helpful.

More like this
Chris Stokel-Walker
5.23.2022 5:35 PM
Literature
I had Google AI narrate my audiobook. The results were... not terrible.
Annie Rauwerda
5.12.2022 11:33 PM
Ethics
The AI-powered Am I the Asshole spinoff is back and better than ever
Ian Campbell
5.16.2022 5:45 PM
Tech
Uber is piloting two types of robotic food deliveries in Los Angeles