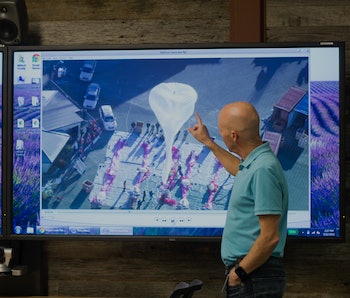 While Facebook has its New Product Experimentation lab, Google has Google X where it plays around and presents moonshot projects that may (or may not) soar. Think self-driving division Waymo, life-extension project Verily, and drone delivery arm Wing. One of those projects, the highly ambitious internet balloon company Loon, is now shutting down over concerns about its viability, a company blog post reveals.

In the post, Google X director Astro Teller explains Loon has had issues with reaching long-term sustainability. In December, Input reported on Loon balloons and how, at least at the time, Google's artificial intelligence controller was successfully keeping the helium balloons stay in the air for over 300 days.

"Sadly, despite the team’s groundbreaking technical achievements over the last 9 years — doing many things previously thought impossible, like precisely navigating balloons in the stratosphere, creating a mesh network in the sky, or developing balloons that can withstand the harsh conditions of the stratosphere for more than a year — the road to commercial viability has proven much longer and riskier than hoped," Teller wrote.

The history — Originally tested in New Zealand, Peru, Puerto Rico, and Kenya, Loon amassed some impressive accomplishments over the years. The company helped farmers in New Zealand, connected companies in Kenya, and helped bring people hit by natural calamities in Peru and Puerto Rico back on the grid. But for a Loon balloon to function and provide connectivity on the ground, it had to remain within a 30-mile radius of a station below, even with new advances to its controllers, that could be challenging. Never mind the problems of cost-effectiveness, exacerbated, no doubt, by newer initiatives like SpaceX's satellite-based Starlink.

What happens now — "Over the coming months, most of the Loon team will be moving on. We’re working to take care of employees and hope to help many find alternative roles at X, Google and Alphabet. A small group of the Loon team will stay to ensure Loon’s operations are wrapped up smoothly and safely — this includes winding down Loon’s pilot service in Kenya. Although Loon is going away, our commitment to connectivity isn’t," Teller says.

Teller adds that Loon has pledged $10 million toward projects in Kenya focused on internet connectivity and business entrepreneurship.

"While we’re sad and disappointed that Loon’s journey has come to an end," he wrote, "connectivity remains high on our list of spaces to keep hunting for moonshot ideas and hopeful Loon will live on as inspiration for others to try audacious, radical ideas."