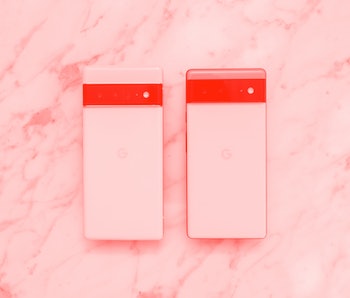 Google technically hasn’t announced the Pixel 6a — a budget version of the company’s current Pixel 6 flagship — but most everyone expects it. And new FCC filings, spotted by MySmartPrice, suggest it could be coming as soon as May.

FCC — The four model filings referenced by MySmartPrice are part of the normal certification tests the FCC reviews before a new device is released. The usual culprits are there: dual-band Wi-Fi, Wi-Fi 6E, Bluetooth, and NFC. The one slightly unusual inclusion is mmWave 5G, one of the more expensive and finicky 5G varieties, which could be on one or multiple of Google’s new handsets.

The timing, and why it feels safe to expect it’s the Pixel 6a rather than some other device is mostly based on how the Pixel 5a 5G was officially announced. Google’s previous budget phone passed through the FCC in July 2021, before getting announced a month later. Google I/O 2022 is about a month away on May 11, the perfect moment to show off a new, more affordable Pixel to Android developers.

Leaks — Thanks to leaks shared last year we have a pretty good sense of how the Pixel 6a will look, which is to say, a lot like the multicolored glass Pixel 6 with a slightly different camera setup on the back and, unfortunately, no headphone jack.

Given how proud Google is of the new design language it’s using on the Pixel 6, it makes sense for it to carry over some of that spirit. We shouldn’t have to speculate much longer, though. If everything goes as expected, we should be seeing the Pixel 6a in a few weeks.