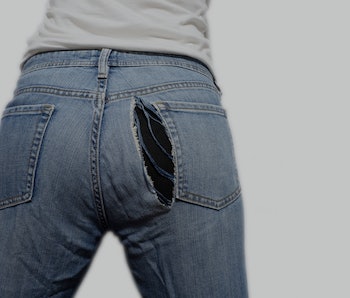 In something of a tragicomedy, a video player app was pulled from Google's Play Store yesterday after it was found to be in violation of the company's "Sexual Content and Profanity policy." Why? Because the app's description listed support for a video subtitle format called Advanced Sub Station Alpha, filetype ".ass." The format is frequently used to subtitle anime content because it allows for advanced features like varying text styles and colors that conventional subtitling does not.

No ass here — The app in question that was removed from the Play Store is called Just (Video) Player. According to the developer, Marcel Dopita, Google removed it shortly after the description was updated to include this line, indicating the various subtitle formats supported during video playback:

The same .ass format is supported by other video player apps, including Plex and VLC, but apparently Dopita tripped up Google's automated review systems, which believed the appearance of .ass in its description implied the app featured, well, ass. Sadly it does not, but Just (Video) Player got kicked in the booty anyway (sorry).

"I knew this was going to happen but I was telling myself that I shouldn't be afraid (as usual) to just put it there - hoping that 'computers' these days are smarter in reading the context," wrote Dopita in a dispute filed with Google. "But I guess not..."

Algorithmic rule — This incident is relatively minor — Google reinstated the app after Dopita's story went viral on Hacker News. But the situation highlights how algorithms can have a big influence on people's lives, making sometimes crude decisions in lieu of human moderators.

Companies like Google rely on algorithms to police their platforms because they see potentially billions of submissions each day; employing humans to moderate is the antithesis of their models of creating products with a few people that are used by billions. The end result is that businesses can see themselves dropped by a major distribution platform out of the blue because of a random computer mistake.

Apple uses a human team to review apps for iOS, and both companies charge commissions on purchases made through their app stores. The argument by Google in favor of using automated tools as the first line of defense is that it allows more apps to be approved, more quickly. Android apps are reviewed by a human only after appeal.

Google has an appeals process for app suspensions, which suggests it knows that its automated detection isn't perfect. But the company puts the onus on the developer to file an appeal and incur any financial losses while they wait for a decision.

Unlike on iOS, Android users can download apps from outside the Play Store, though it still remains the dominant marketplace on the OS.