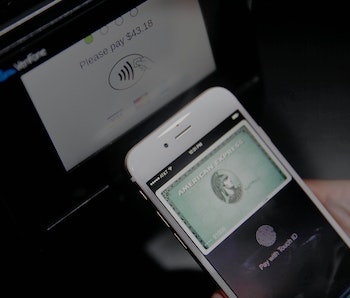 Some interesting data has come out suggesting that few iPhone owners in the United States ever use Apple Pay, the mobile payments service that enables users to pay at stores with just a tap of their phones on a compatible card reader.

Despite its advertised convenience and ease of use, a study by PYMNTS found just 6.1 percent of U.S. consumers who set up Apple Pay on their devices — meaning they added at least one credit or debit card — have gone on to use the feature to buy something. That means 93.9 percent who have set up the mobile payments feature end up pulling out plastic or using other methods instead.

It’s not exactly an endorsement of the feature which Apple was so enthusiastic about at launch, and which it’s spent a lot of time and money promoting.

Apple Pay was first introduced in 2014. By 2015, usage among iPhone owners reached just 5.1 percent, suggesting that adoption hasn’t risen much in subsequent years even though most iPhone users in the U.S. today own a device recent enough that it supports it — 96 percent, to be exact.

Transaction volume has at least ballooned, with PYMNTS estimating that Apple Pay will process $90 billion in transactions this year, up from $5 billion in 2015.

Solving a problem — PYMNTS chalks Apple Pay’s low adoption up to the continued dominance of plastic cards, with Apple Pay not offering enough benefit to be worth the effort. “To be successful, innovation must solve a problem, fix a source of friction or improve an experience that is so painful that consumers or businesses are motivated to switch.”

When Apple first launched Apple Pay, it heavily promoted the security of the service’s tokenization system — a merchant would receive a one-time credit card number that expired after the transaction — and the convenience of tapping over pulling out a wallet. But the security issue likely isn’t compelling to most people. And using Apple Pay requires pressing a button on the side of your phone and authenticating with your face. It’s only marginally more convenient than paying with a debit or credit card.

“Seven years in, Apple Pay just hasn't lived up to its potential for transforming the point-of-sale experience in the store,” PYMNTS wrote.

America-centric issues — Maybe if contactless payments were already common in the U.S. years earlier, as in other countries, consumers might have been attuned to tapping for things and seen the convenience of ditching their wallets for just a phone. But only 10 percent of merchants had contactless systems at launch, and even today it’s still a gamble whether a store will accept contactless payments — Apple charges high fees to merchants. Other countries like China and India have seen faster mobile payment adoption, but maybe because they jumped straight from cash to mobile payments while the U.S. transitions from cards to contactless.

In countries like Canada and the U.K., nearly every merchant brings a wireless payment reader out to the customer, who can pay using Apple Pay or other contactless methods. Even bars and restaurants use these systems, supposedly to give customers peace of mind that their card information isn’t being stolen. By contrast, bars and restaurants in the United States still tend to take your card away to the back of the house, which makes using Apple Pay inconvenient.

And now American banks are finally issuing contactless cards, further negating the convenience of Apple Pay as new cards don’t need to be inserted and are widely supported.

PYMNTS suggests the only two ways for Apple to increase adoption are to take market share from Android, or to incentivize more people to use Apple Pay through exclusive discounts at checkout. The company earlier this summer offered special promotions through Hotel Tonight, Sonic, and other brands to customers who paid using Apple Pay.