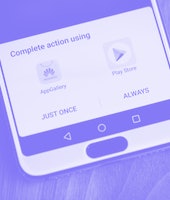 How much Huawei just granted app developers in the wake of U.S. blacklist.

Huawei held a developer conference in London last week to display its plans for its post-Google ecosystem. The U.S. blacklisted the Chinese company, cutting it off from Google services and only allowing use of a rudimentary Android 10 base. Now, it appears that Huawei’s using this punishment to take a shot at Google with its Harmony OS. Harmony is expected to have less intrusive ads, use TomTom instead of Google Maps, and launch mid-year.

'Ads aren’t important to us' — Dr. Jaime Gonzalo, the company’s Europe-based vice president of consumer services, used the conference to roast Google’s ad practices. Huawei wants to do away with the banner ad norm. Using the example of someone who loves The Terminator franchise, Gonzalo said the Huawei system of advertising would show them a Terminator soundtrack the next time they opened a music app or a robot-fighting game in the app store.

“This is also very good from the privacy perspective because we are not at our core an advertising agency, we don’t care if you’re a man or a woman, how old you are — we just care if you like Terminator,” said Gonzalo, according to SlashGear.

Huawei’s apps — Huawei’s mobile services went live in India last month, and the app store is currently pretty scant, but heavy-hitters Amazon, Snapchat, TikTok, and "Fortnite" are already available. The company offered a £20,000 incentive for any app uploaded to the store by the end of the month and doubled-down with £20 million worth of promotions for British and Irish developers. The Register also reports the gallery currently includes 50,000 apps — an impressive number for a few months, but nowhere near the millions of apps in Google and Apple’s app stores.

Though the loss of Google’s services was a shock, Huawei isn’t hurting for cash and selling out hardware domestically. It’s still early days, but the U.S.-China beef inadvertently added some fresh competition to the mobile services market.