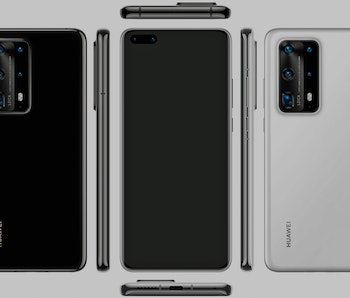 Yesterday, images of what’s almost certainly Huawei’s regular P40 leaked. Today, it’s the turn of the premium, P40 Pro. Pictures from well-known (and generally on-the-money) leaker Evan Blass have turned up on Twitter, showing five rear cameras, one of them rectangular, which suggests a periscope-style zoom lens like the ones seen in Huawei’s P30, Mate 20, and Mate 30 devices.

We’ll know more in Paris — Huawei’s expected to unveil the two P40s, possibly alongside a third, "Lite" version at a Paris press event in March. It remains to be seen how much there’ll be left to reveal when the event does roll around, but the far more newsworthy aspect is how Huawei will manage the lack of Google apps on its forthcoming flagship.

The ongoing trade war between the U.S. and China saw the Mate 30 range launch without Google apps, resulting in poor reviews and uptake in Europe, which has traditionally been a market in which Huawei’s smartphones have performed well. Huawei’s previously hinted at plans to launch its own mobile operating system so as to sidestep the ban, but it has yet to materialize.

It won’t matter for U.S. consumers anyway — Whatever happens in March, don’t expect to see Huawei phones in your nearest Verizon or T-Mobile store thereafter. Even in its heyday, Huawei struggled to get any major U.S. operators to stock, let alone promote, its smartphones. Given the Trump administration's unsubstantiated insistence that Huawei is a threat to national security, that’s very unlikely to change.