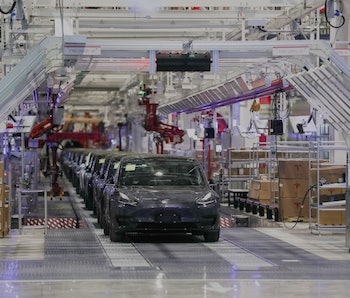 We got our first look at the production-ready Model Y at the end of January, along with the news that the estimated range on the Performance iteration of the Model Y had been increased from 280 to 315 miles. Now some customers who ordered the crossover have received emails letting them know they can expect their vehicles in March and guiding them through the next steps, like arranging finance, Electrek reports.

Another good sign for Tesla — Delivery of the Model Y was originally slated for fall. Getting it ahead of schedule is a welcome surprise, and an unprecedented one from the hitherto perpetually tardy Tesla. One questionable EDM track from founder and CEO Elon Musk notwithstanding, Teslas had an exciting few months. Its share price has punished short-sellers who’ve long bet against the brand and has put legacy automakers to shame, its Chinese operation is having a hard time keeping up with demand, and the company outpaced its own sales targets last year.

But it’s not all smooth sailing — Earlier this month researchers from McAfee claimed they tricked a Tesla into speeding up by 50 mph using just a piece of tape, its autopilot system also had a run-in with the cops, it’s facing a class-action lawsuit regarding cobalt mining practices and child labor, and the federal credits that used to make it a more attractive prospect for U.S. buyers came to an end this year.

Nonetheless, the appetite for Teslas in the U.S. shows no sign of abating. Considering the Cybertruck has notched up over 535,000 pre-orders (and toy replicas of it are on backorder), we expect the far more sedate and stylistically conservative Model Y to sell faster than the company’s facility in Fremont, California can crank them out. Cue more happy whiteboy dancing from Musk.