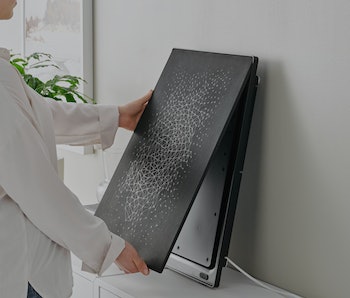 The latest tech collaboration from Ikea and Sonos is a smart speaker disguised as a picture frame with interchangeable panels. The Symfonisk picture frame works with other products in the Symfonisk line, such as the lamp and bookshelf speakers, but that’s not all.

The Sonos tech underneath means it pairs with all Sonos products and is compatible with over 100 streaming services. With built-in Wi-Fi, the Symfonisk speakers can be controlled via the Sonos app. It’s a good-looking picture frame with high-end sound and functionality, but it shouldn’t be hung on a wall unless you’re okay with a dangling cable.

Can’t hang it — The Symfonisk speaker pulls double duty, and while it’s a piece of minimal art that is designed to blend in any living room, the hanging white cord that snakes down makes it an eyesore when hanging the picture frame/speaker combo. I’m not a perfectionist when it comes to cable management, but I can’t overlook the cord coming out of the picture frame, even if it’ll probably sound amazing because it’s a Sonos product. I don’t think that making it wireless by adding a rechargeable battery would have solved the issue either, because who the hell wants to charge their picture frame?

I’m not saying you shouldn’t buy it, but maybe avoid hanging it up if you can. Leaning the Symfonisk frame speaker against the wall hides the cord, so there’s at least that option. You could make two small holes in the wall to run the cable through like you would to cleanly mount a TV, but that has its own set of challenges. Not everyone can drill holes into the wall, especially renters.

Ikea’s other speaker — For diehard Sonos or Symfonisk users, this picture frame speaker might be a no-brainer to add into an existing speaker ecosystem, but others may want to look to Ikea’s other offerings. The Eneby speaker is only $49 and has many of the features found in the picture frame. Sure, it lacks Sonos compatibility, but if you’re going to lean the picture frame against the wall, this is a cheaper option that doesn’t look bad at all. Other Ikea items, such as the air purifier and air quality sensor match the Eneby’s muted aesthetic.

This is the first product from the Symfonisk line to be released since 2019 when the collaboration between both companies was announced, making it the third product in the Symfonisk line. Ikea will begin selling the Symfonisk picture frame on July 15 for $199. Previous products, the Symfonisk bookshelf speaker and table lamp, were priced at $99 and $189, respectively.